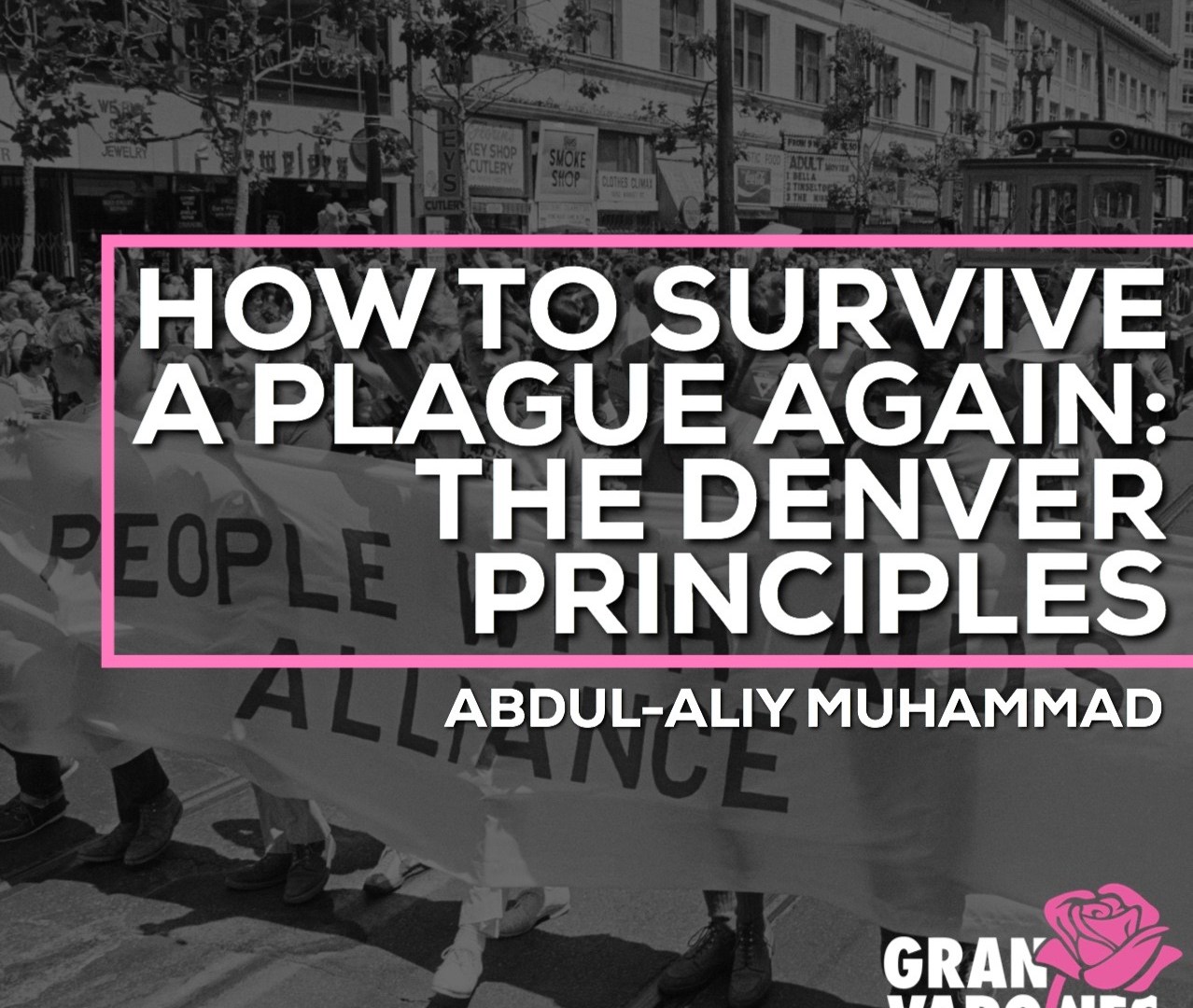 About two week ago, I did the very rare thing of going live on Instagram. I asked my comrade and my good, good gurlfriend Abdul-Aliy Muhammad to join me as we discussed “How to Survive A Plague…Again.” For about an hour and a half, Abdul and I talked about what it was like to live through the AIDS epidemic as it was in the 1990s. We shared stories about bearing witness as our mothers navigate and provide support to those living and dying during a time when Black and Brown communities were left to their own devices. As a few dozen viewers watched and engaged with our Instagram chat, we shared how we were coping with the current COVID-19 pandemic and how we can honor and look to the work of poz activists of the past who created an organizing, mobilizing and survival guide for people surviving a plague. We landed on the Denver Principles.

So to continue that conversation and to honor the requests of several viewers who joined us during that chat,  here is Abdul-Aliy giving a brief history of the Denver Principles and how, 30 years later, the principles are still relevant.

The Denver Principles is a radical document, its contents fit on one page, but the words are sublime and pointed. The drafters of the principles stormed the National Lesbian and Gay Health Conference, which took place in June 1983. This conference, held in Denver, Colorado, would host the Second National AIDS Forum. At the closing presentation of the forum, Richard Berkowitz led the unrolling of a banner that read “Fighting For Our Lives” and read their declaration: “We condemn attempts to label us victims” that “implies defeat” and suggests that we are helpless. “We are People With AIDS” demanding support and not a “scapegoat” to “blame” for “the epidemic or generalize about our lifestyles.” The crux of this declaration was to make clear that autonomy is still resident in our bodies, that we have the right “as full and satisfying  sexual and emotional lives as anyone else.” These words at a time when oppressive messaging told HIV positive people that they could no longer be fully seen as human because they seroconverted.

Any revolution of the body owes its indebtedness to many enslaved people who found themselves at the behest of white supremacist structures of control, experimentation and intentional infection, such as the Tuskegee Syphilis Experiment.

These principles changed the relationship between medical provider and patient, expertise and care were held by both the AIDS patient and doctor. It was a bold repudiation of paternalism and showed the variance between those impacted by the disease and the ever present judgment of caregivers.  Berkowitz and Michael Cullen went on to pen “How To Have Sex In An Epidemic” stating that “sex doesn’t make you sick, diseases do” and offering examples of how to contain STIs from a “closed circle of fuck buddies” to “jerk off clubs” in what became truly iconic writing. Any revolution of the body owes its indebtedness to many enslaved people who found themselves at the behest of white supremacist structures of control, experimentation and intentional infection, such as the Tuskegee Syphilis Experiment.

Today we face an unprecedented strain on the already inadequate and anti-black U.S. healthcare infrastructure. This problem, coupled with a president that seems to be wearing no clothes, makes for a deadly combination. The rationing of care to those who have severe symptoms, which is discriminatory, is already happening. In Alabama, POZ reports that the state’s “pandemic guidelines recommend winnowing out people with certain medical conditions” including AIDS. Black women are being told that they aren’t a priority for COVID-19 testing and then later dying of the disease. Recent data reveals that COVID-19 is killing Black people  in large numbers. 70 percent of COVID-19-related deaths in Chicago are of Black people. This is being reflected in New Orleans and Milwaukie.

This means that organizing around something that models the Denver Principles would be just as needed now as it was then. A nation in crisis will seek to allocate resources to those deemed desirable by the system. This means that communities who are already stigmatized, marginalized, and given shoddy medical care will be the most vulnerable. Elderly, immunocompromised, and houseless people will be ravaged by COVI-19 without movements organized to ensure they will receive the care they deserve. Incarcerated people are also at a higher risk for sickness due to the lack of sufficient sanitation behind bars. I think we should be demanding the following:

Abdul-Aliy A. Muhammad is a poz organizer and writer from Philadelphia.