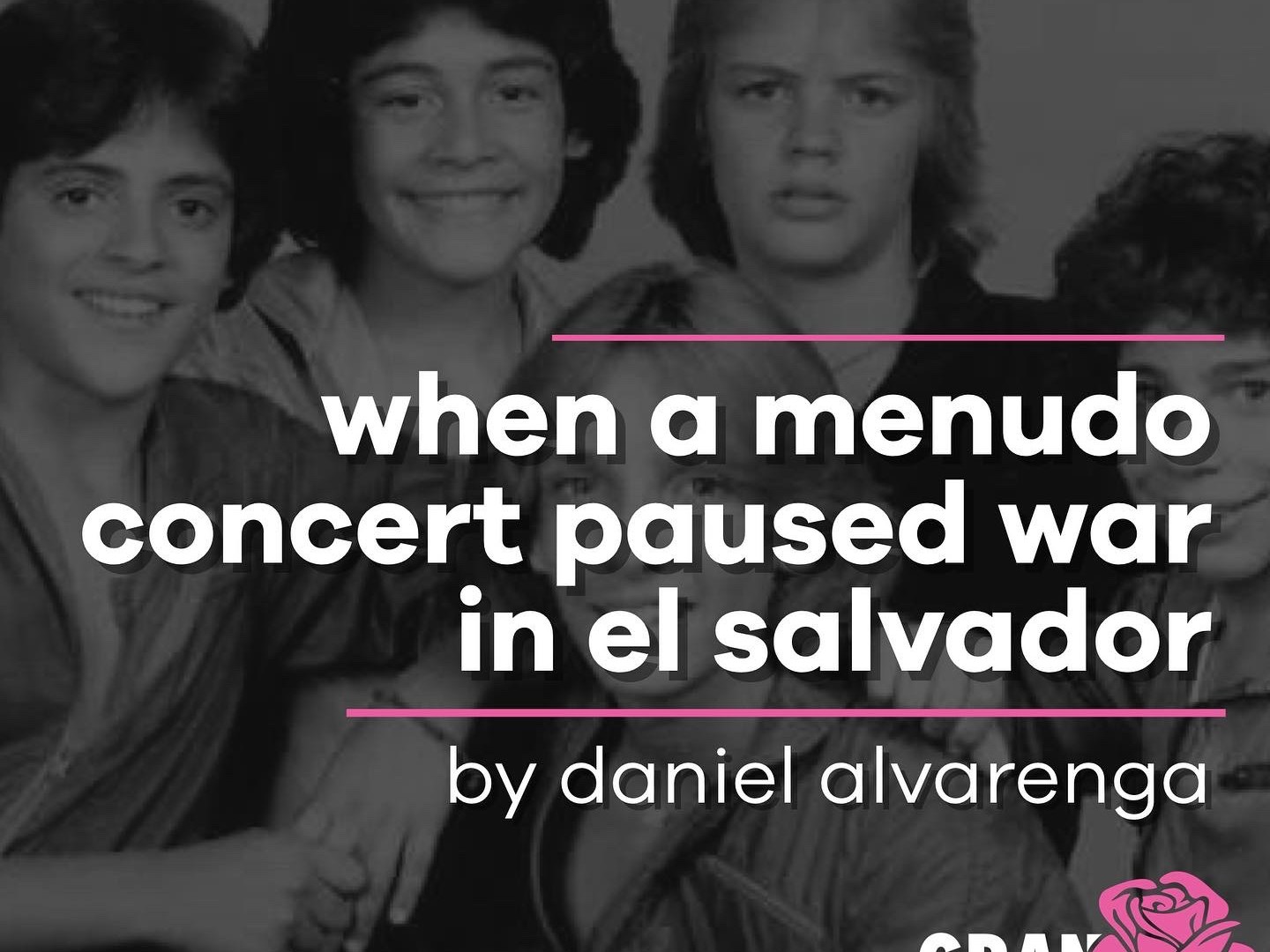 When I pressed play on Menudo: Forever Young on HBO Max , the new docu-series on the iconic Puerto Rican boy band, I didn’t expect to learn something about El Salvador’s history.  I was a little too young for Menudo, but for my big sister and others like her who came of age during the brutal war years — it was the soundtrack to their youth. Menudo’s cultural impact was so massive, that they briefly eclipsed the Salvadoran Civil War.

In the first of four episodes, Menudo’s meteoric rise to fame and international impact is highlighted. During one the group’s first Latin American tours included a now historic stop in the capital of San Salvador in December 1982.

Journalist Juan González is featured saying, “It was probably the worst possible time you could think of to do a concert, if you were aware of what the country was going through.” Juan totally read my mind!  However, I was shocked to learn that El Salvador actually held a temporary cease-fire to accommodate the Menudo show. A bloody civil war that claimed tens of thousands of lives was temporarily halted for teen pop music. The power that has.

For context, the 12 year war (1980-1992) involved the U.S.-funded fascist Salvadoran government against the Marxist guerillas of the Farabundo Martí Liberation Front, and over 75,000  people were killed in a tiny country that’s roughly the size of Massachusetts. The war also created an unprecedented mass migration of Salvadorans to big U.S. cities like Los Angeles, Washington D.C, Houston, San Francisco and more. My family came to California during this period fleeing the violence and instability.

Johnny Lozada, who was one of the Menudo members between 1980 and 1984, talked about the heightened security upon their arrival in San Salvador: “I knew that we had 125 security guards inside the hotel, but I didn’t know why.” He goes onto to talk about the fun he had playing with the security guards, who were actually government soldiers. I was struck by how Johnny describes them as boys, not men, and said they were about “19, 20, 22, if not younger.” I’d argue they were likely on the younger side.

One of the key features of the war in El Salvador was the use of child soldiers, especially young boys. It was routine practice for boys aged 12 to be given guns and sent to fight. Oftentimes these boys were rounded up at schools or their homes. I know too many Salvadoran uncles, who when they got to be Menudo aged, had to migrate to avoid forced recruitment.

When the concert ended and it was time to part, Johnny recalls that one of the soldier guards said “we’re off to the front lines tomorrow.” The moment highlights the privilege the Menudo members had to continue being teen idols, while Salvadoran soldiers, boys roughly their age, had no choice but to fight in a war.

However, when you watch the entire of Menudo: Forever Young series, you learn that it was also a harrowing ordeal full of exploitation, sexual abuse and lifelong scars for the Puerto Rican young boys in the band. I can’t help feeling after watching this series that in a Latin America ravaged by imperialism, whether it’s Puerto Rico or El Salvador, childhood is dangerous and not guaranteed.

Daniel Alvarenga (he/him) is a queer independent journalist from California based in Washington, DC. He’s a child of refugees from El Salvador and has dedicated his career to developing a multimedia practice—text to audiovisuals—in service of Central American communities in the region and the United States. He’s previously worked for Telemundo and Al Jazeera with bylines in the Washington Post and Rolling Stone.