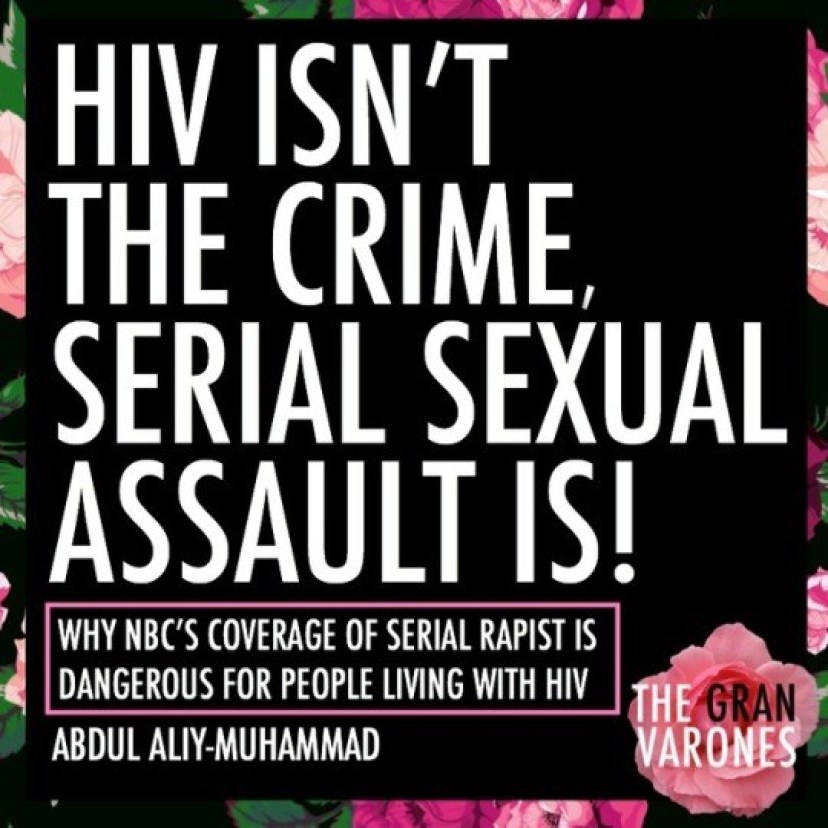 The weaponization of HIV infection: in this case, the use of bodily fluid/s for use as a weapon and the assumption of infectiousness, has a long and storied history in the United States and globally. This refers to enacting HIV-specific statutes that criminalize people infected with HIV and often doesn’t take science or biomedical frameworks into consideration when criminalizing HIV positive people. Much in the way that white people pushback on intent when confronted with labels of racism, so too, does that apply here. Just because a person is positive doesn’t therefore shift intent to intentional exposure.

I was triggered by NBC 10 as the coverage of a serial rapist in Philadelphia turned to an HIV story. As someone who is both a survivor of sexual violence and HIV positive, I am floored by the way this public narrative has been augmented and transfixed, dangerously with a heightened emphasis on HIV infection.

Then to read that the Mayor of Philadelphia, Jim Kenney stated on the record that the suspect has HIV, makes me feel unsafe and stigmatized in this city.

HIV criminalization laws or statutes according to The Center for HIV Law & Policy, use “the reliance on a person’s positive HIV status, either under criminal laws that apply explicitly to people living with HIV, or under general criminal laws or sexually transmitted infection laws.”

The history of the criminalization of HIV extends back to the fight for funding for programs and treatments for HIV positive people in the US, largely because of collective direct actions organized by Act UP (AIDS Coalition to Un-Leash Power). The Ryan White Care Act was enacted by congress on August 18, 1990, named after a teenager who contracted HIV from the use of blood products, prescribed as treatment for hemophilia.

Che Gossett, writes in Cell Count that “Interestingly, HIV criminalization model legislation (proposed legislation and/or legal frameworks/paradigms for state and jurisdictions) was created by the American Legislative Exchange Council (ALEC) which pushed for voter ID and stand your ground legislation that was put in the media spotlight after the police killing of Trayvon Martin.” The culture that creates barriers to care and treatment starts with public narratives about HIV. If the city of Philadelphia is committed to ending an epidemic, it is imperitive to address the violences of reframing a serial rape story into an alarming HIV one.

I stand with survivors and believe that survivors should absolutely be made aware of the potential exposure to any STI. The truth is that there are mechanisms to make sure this happens. As someone who worked in public health, it is alarming that media and elected officials are complicit in HIV antagonism by not being intentional about the ways in which these stories are covered.

1. NBC 10’s coverage is stigmatizing and dangerous for people who are living with HIV. Reframing a serial sexual assault case into an HIV case, weaponizes, reinforces and conflates predatory behavior and links intent to HIV.

2. Survivors have the right to know. This story was about sensationalizing HIV status for website clicks. This horrific story didn’t need the complicated insertion of HIV stigma to garner shock and/or concern. There are already ways to inform survivors of possible exposure to an STI without creating this public narrative.

My critique is this – in a world that doesn’t know how to support HIV positive people, conflating HIV with intent or predation increases the vulnerability of HIV in our communities. This actually makes it less likely that people living with HIV would feel safe to disclose their status. This is counterproductive.

If you read this story, PEP or post exposure prophylaxis is a tool that can prevent seroconversion within HIV negative people within a window period of 3 days.

4. NBC could state that a source claimed that the alleged perpetrator had a positive STI status without disclosing what STI it is.They could also not post health information in the article and state that local medical officials encourage survivors to reach out to them for health information.

5. This coverage doesn’t even mention undetectability when it comes to HIV exposure risk or vulnerability. Undetectability refers to someone who has HIV and isn’t able to transmit the virus because of medication that suppresses the viral load to a point where infection can’t be transmitted.

6. Isn’t it the case that the criminal justice system will make linkages between a person’s criminal act/s and the intent behind them? This isn’t the job of the media.

Rape and rape culture is deplorable and should be confronted. HIV and rape conflation should be too.

Abdul-Aliy is a Black poz non-binary jawn* from Philadelphia PA. They organize with the Black and Brown Workers Cooperative and otherwise loves to give out free hand-jobs when able. A Flower Left To Wilt, their collection of writing/poetry will be released on October 26, 2018. If you want to hear them talk ish weekly, listen to FOR COLORED BOYZ PODCAST!