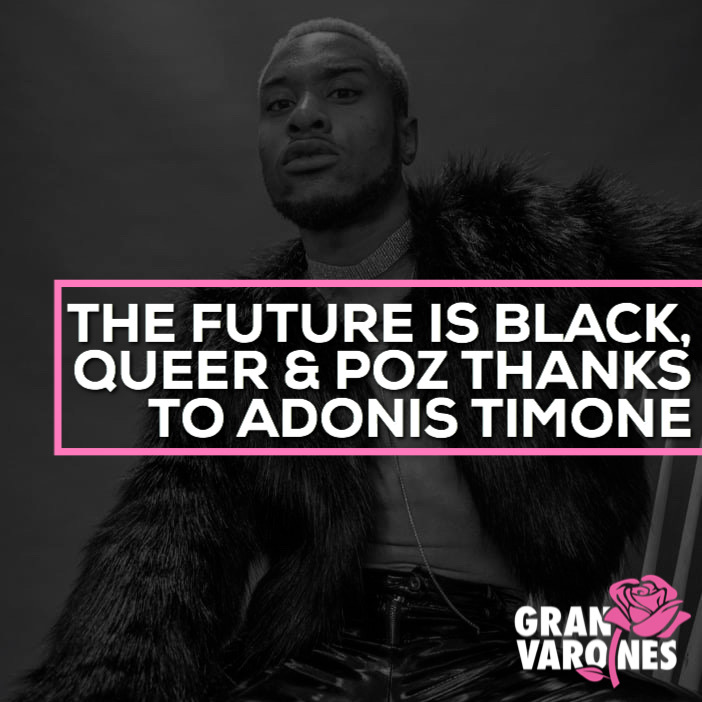 Adonis Timōne is not here to blend into the background. Straddling the lines between artist and HIV activist, Adonis Timone is combining both to push the boundaries in the world of Hip-Hop and HIV activism.

I met Adonis last September when we began working in partnership as part of ECHO (Engaging Communities around HIV Organizing), a youth cohort of young people living with HIV who are working to raise awareness about the need to decriminalize HIV. It wasn’t until the final day of our five-day cohort meeting that I discovered that Adonis, who was pretty reserved most of the time, was an emerging queer Hip-Hop artist. And because Adonis knows the power of a dramatic entrance, it wasn’t until they took the stage during the closing talent show and music dropped that all 150 young people in attendance were left in complete awe, for a few seconds, because everyone began to dance as soon as Adonis began rapping.

Adonis, who is gender non-binary, incorporates their experiences, both painful and joyful into their art and expression. They are in great company with other Black Queer artists such as Mahawam and Mykko Blanco, who are confronting HIV stigma through their art.

In honor of National Black HIV/AIDS Awareness Day, Gran Varones partnered with MyStoryOutLoud, a storytelling project amplifying the stories of LGBTQ Youth of Color, to schedule a chat with Adonis about their music, their impact, and what it’s like being a Black queer HIV positive Hip-Hop Artist.

So where did you grow up and what was that like?

I grew up in Milwaukie, Wisconsin, in a pretty urban area. Growing up in Wisconsin is like…everyone pretty much knows each other especially if you’re from the hood. Then when you grow up and get into the gay scene, it’s like a big family.

When did your love for creating music begin?

I was about seven years old and I wrote something that went along the lines, “I keep it so fresh on the microphone, girls won’t leave me alone, keeps calling my phone.” I was young! When I was 14, I went into the studio for the first time and I was so scared to show my mother because it had a lot of curse words in it but she really liked it and played it more than I did.

When did you begin to craft your first EP?

In 2017, I was messing with my laptop and seeing what I can do, I then showed some stuff to my friends and they kept encouraging me to keep going and creating. It was around this time that my ex-boyfriend had a connection with a really good engineer. We went into the studio together and it’s been that same relationship since then.

What has been the response from people?

I get really good feedback from people of my same experience and even in the heteronormative community. They respond really well once they sit down and actually listen. But sometimes, when I would go to open mic nights, there would be times when there would be like dead silence or no response at all. But there also have been times when people are like, “Oh my god, “he” is amazing.”

Your lyrics are unapologetically about being queer and sexual. What has been the response from those in the HIV field?

I did a freestyle to Nicki Minaj’s song Megatron last summer and I recall colleagues that worked in the field of HIV prevention suggesting that I change my lyrics when I said: “He almost took his own life when he tested dirty.” They didn’t enjoy the stigmatizing word  “dirty,” and felt as if I was encouraging the language. I was not. I was merely meeting the community where they were to understand the severity of the feeling of being diagnosed with HIV. It is life-changing and going through our own grief you may feel “dirty, sick, or maybe even nasty” because it’s what we as Black folk hear growing up. Then I continued the rap with lyrics of empowerment and with an encouraging message to keep going and thrive. We tend to discriminate our own people for being different, yet we all have similar struggles.

What are your thoughts about Black queer representation in entertainment?

There has been an uproar in the representation of LGBTQIA+ in media and entertainment in the past few years. With shows like Pose, Love & Hip Hop, Sex Education, and many more, we finally have television that tells stories that are relatable to our own stories and situations. Hip-hop has become one of the most popular genres in the world and black same gender loving individuals still have little to no representation despite our efforts for equality. In rap culture, it’s almost considerably acceptable to be homophobic with derogatory language that deems females and gay males less than their more masculine counterparts. The fact that the Black community as a whole is affected by most of the same socioeconomic disparities that have hindered the development of our neighborhoods, healthcare, and mental stability is enough reason to understand that “we’re in this together.” Which is also the theme of this year’s National Black HIV/AIDS Awareness Day.

What is your message today for Black HIV/AIDS Awareness Day?

As someone who is not only unapologetically Black but queer and living with HIV, it becomes difficult to find spaces that are safe and accepting. I’ve performed for heterosexual crowds that loved my music and crowds that hear my lyrics and instantly turn their noses up and depreciate my music and performance. I know not everyone will enjoy my music and I respect that. Yet it takes a lot of courage to perform on stage in front of the same community that labels you a f*g before they even know your name. However, I try not to let that get to me. In my most recent single, Spot,  I address some of these topics literally saying “ I was called a f*g before I knew what it was.” Twice for dramatic effect.  And it was the truth! We have to understand that WE’RE IN THIS TOGETHER! We have to address these unspoken stigmas. If not, then we can’t move forward and thrive as a whole. I have fans that encourage and constantly remind me that I matter, and my voice should be heard. Music is universal and everyone deserves to have their share. I will continue to work hard and use my music and platform to inform, protect, and honor my values and beliefs and advocate for those whose voices go unheard.