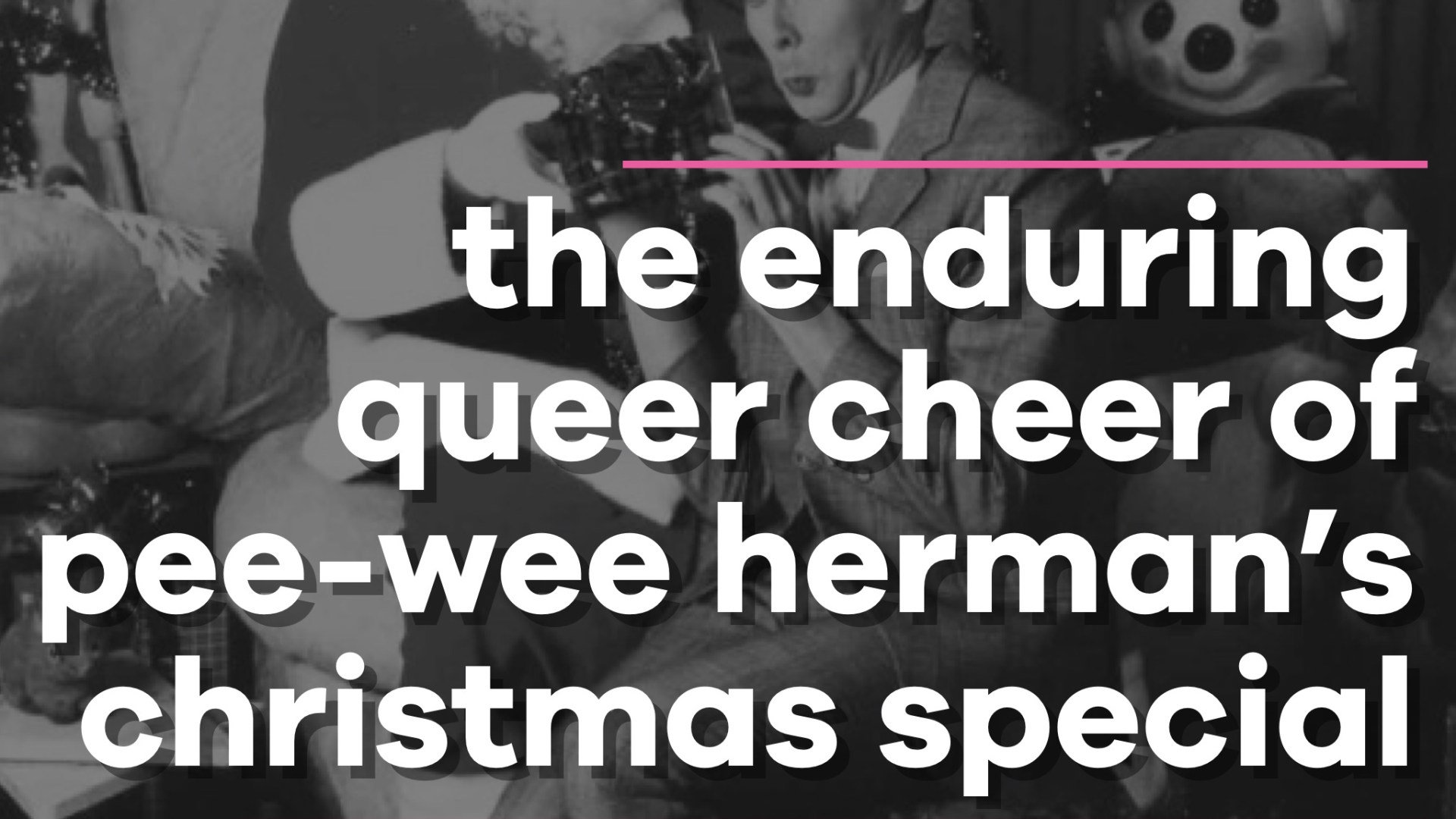 33 years ago this week, one of the wackiest, campiest, and queerest christmas specials premiered on network television– and it was a kids show!

“pee-wee’s playhouse” was the brainchild of paul rueben and was america’s most watched weekly children’s show from 1986 – 1990. based on his 1981 stage show and hbo comedy special, “pee-wee’s playhouse” was a live-action show that was part of the 1950’s “howdy doody” nostalgia and 1980’s fringe arts festival. every saturday morning viewers of all ages were invited into a fantasy world filled with bright color and asymmetrical shapes. where eccentric people could exist alongside talking puppets, a loveable chair, a genie and other strange creations from the queerest parts of any imagination. throw that in with the joyous campiness of christmas and you get this brilliant and enduring christmas special.

premiering on december 21, 1988, just a few weeks after the first observation of world aids day, the “pee-wee’s christmas special” was a kind of queer holiday balm during a time when the epidemic was still unfolding with a reported over 80,000 cases and 62,000 deaths. the dilemma of celebrating during such tragic times was ever present. however, “pee-wee’s christmas special” with its queer-as-fuck roster of guest stars that included cher, whoopi goldberg, little richard, grace jones, kd lang, the rubio triplets, joan rivers, oprah winfrey and even zsa zsa gabor to name a few – was a reminder that celebrating with chosen family is medicine. and this is why over three decades later we still celebrate this campy ass special. here are our favorite moments!

pee-wee’s friend is the absolute queen of 80’s camp fashion. her christmas dress, and extensively decorated bee-hive hairdo are legit what queens on rupaul’s drag rage continue to strive for. and can. we talk about this scene!? certainly, the special and the show as a whole is filled with extremely double entendres, but parts of this scene where the playhouse characters react to miss yvonne’s explanation of mistletoe are pretty straight to the point.

grace jones is one of the most influential artists to emerge from the queer club scene of the 1970s and quite frankly, ever! given the moniker of “queen of the gay discos,” she amassed a huge queer following in the late 1970s that still endures. and in 1988, she brought that queer AF energy to the playhouse when she performed the only version of “little drummer boy” that matters.

the del rubio sisters garnered notoriety as a club act but it wasn’t until the mid-80s that the trio broke into the mainstream. their campy fashions and acoustic/folk covers of contemporary poo songs of the time landed them cameos on 80’s sitcoms including “the golden girls.”

little richard scorched the path of androgyny in rock & roll that prince and david bowie are often given sole credit for. in 1988, little Richard was more than 30 years into his legendary career and still outraging moralists with his unapologetic flamboyance while inciting joy was nothing short of an act of resistance.

by 1988 was not only one of entertainment’s most influential fashion icons, pop music legend, and influencer of drag queens, she was also an oscar award-winning actor. but I am sure the most exciting moment for her very successful year in 1988 was stopping by the playhouse to introduce the day’s secret word which was ironically “year!”

k.d. had just released her debut album in 1987 campy/quirky rock-infused brand of country music and androgynous esthetic made her a fan amount queers. her rendition of the 1957 bobby helms classic “jingle bell rock” is so chaotic that it’s iconic.

it wasn’t often that we got to see pee-wee dressed in anything by his bow-tie and grey suit but honey, when did zhuzh it up, he gave us a moment! exhibit a: this lovely green snow suit and white boot combo. I need this look pronto!

ok, so there are several moments that make one say aloud, “wow, they got away with that!?” none more than the “fruitcake” running gag. after being gifted numerous fruitcakes, pee-wee announces that the playhouse has a new wing made entirely of – ya guessed it – fruitcakes. after he makes this announcement, pee-wee opens the door to the new wing and reveals two buffed men in construction outfits, one who is shirtless, building the “fruitcake room.” pee-wee then says to the two construction workers, “here’s two more fruit cakes .”

the grand finale does not disappoint. where else can you find laurence fishburne as a cowboy, s. empatha merkerson of “law & order” fame as a mail person, “blacula’s” william marshall as the king of cartoons singing christmas carols alongside annette funicello and frankie avalon from the original mickey mouse club. if this isn’t a reminder that chosen families are often wacky and lovely – then i don’t know what is.