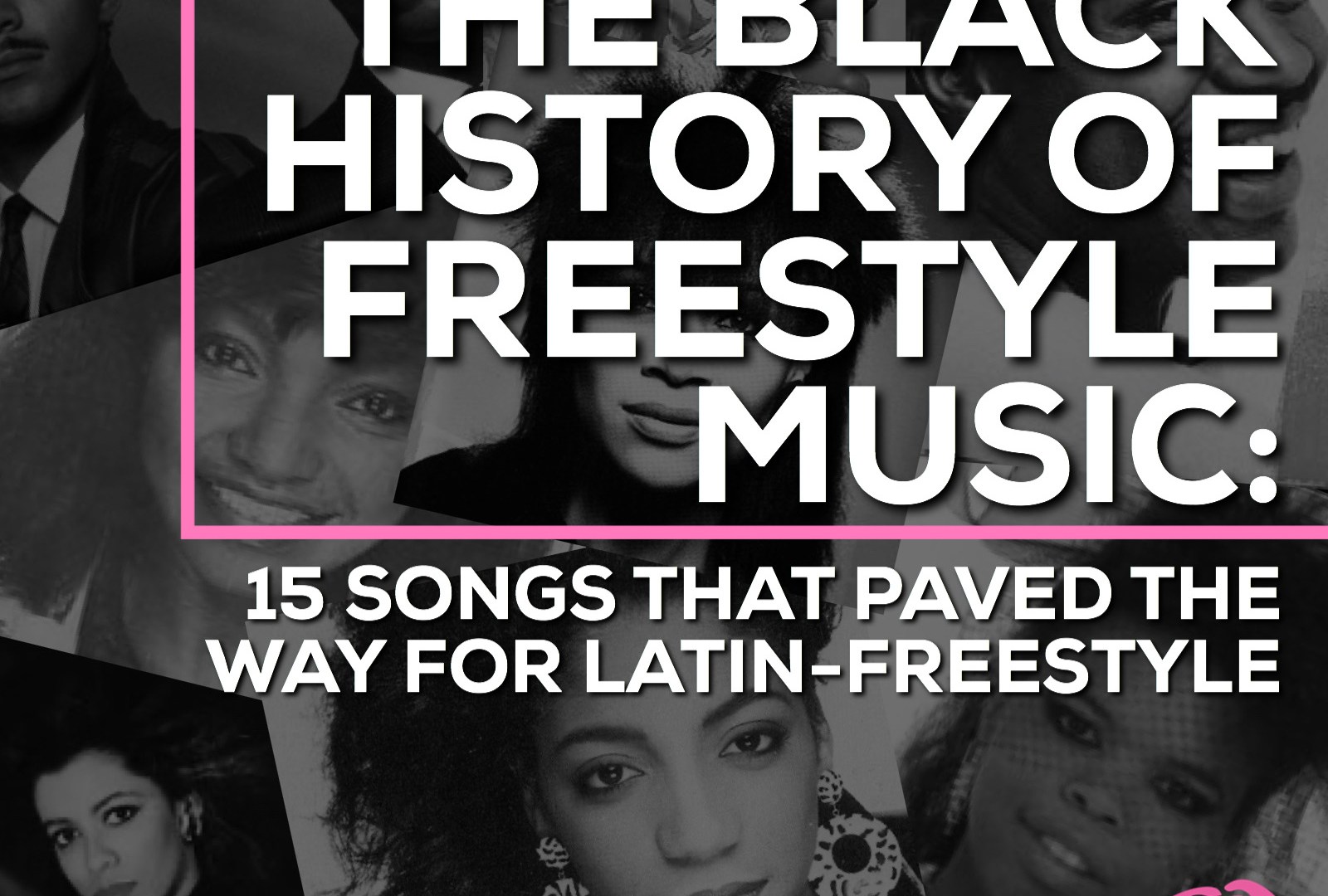 the late great and house music pioneer, dj frankie knuckles, once said that house was disco’s revenge. and he wasn’t lying. but in the years between the racists- and homophobic-driven disco backlash in 1979 and the rise of house music in the late 1980’s, black, latinx and lgbtq club goers were building the queendom for the eventual reign of house music. and those building blocks included the sound of electro and freestyle music.

when most people think of freestyle music – that is those who actually know or who are willing admit that they know what it is – they associate the complex genre of hard electro beats, loud bass drunks, orchestra hits and latin percussions exclusively with latinx or italian communities. but like disco, freestyle music has its roots in black music.

at the start of the 1980’s, the state of dance music was wobbly at best. while the genre still thrived underground, it was seen as poison at the mainstream level. that was until the introduction of the roland tr-808 drum machine. one of the breakout songs to utilize this magic of of the 808 was afrika bambaataa’s 1982 hit “planet rock.” the song not only forged a new direction for hip-hop but it forever changed the sound of music.

electro music, which was widely referred to as “breakdance music” in the early 1980’s, exploded on r&b radio with songs “one more shot” by c-bank featuring Jenny Burton and “play at your risk” and eventually in pop radio after the monstrous success of “let the music play” in 1983. and black artists were at the forefront of the movement. here are 15 songs that played a critical role in the history of freestyle music.

“play at your risk” by planet patrol is one of the most brilliant electro songs. released in 1983 and produced by the same team that delivered “planet rock”, soul patrol’s vocal performance on “play at your risk” masterfully walked the line between doo-wop and electro.

“let the music play” introduced the electro sound that later birthed the freestyle genre to the masses. released in 1983, the song peaked inside the top 10 on both the pop & r&b charts making shannon the mother of freestyle music.

in 1983 world renowned vocalist lisa fischer (yes, that lisa fischer!) made her solo debut with the barbosa & ligget produced “on the upside” under the stage name “xena.” the song was a minor club hit in the US and UK.

after dominating r&b/funk music in the late 1970’s, chaka khan rebranded herself as a one of electro music’s leading vocalists with her 1984 album “i feel for you.” one of the album’s most slammin’ tracks was the john robie produced “my love is alive.”

“rock the box” was the late great sylvester’s foray into the 808 drum machine universe after helping to introduce electronic dance with his 1979 hit “you make me feel (mighty real).” released in october 1984, “rock the box” proved that sylvester could pack the dance floors in the post-disco era

loleatta holloway’s 1980 club hit “love sensation” is one of the most sampled songs in history featured prominently on marky mark and the funky bunch’s 1991 #1 pop hit “good vibrations.” loleatta reached #5 on the dance chart in 1984 with the arthur baker produced “crash goes love.”

featured on the 1984 motion picture “breakin’” soundtrack (a movie about a white woman trying to appropriate the breakdancing movement), “99 1/2” was a slammin’ electro cover of the alton mcclain & destiny’s 1979 disco tune. townes’ cover peaked inside the top 10 on the dance chart and just outside of the top 20 on the r&b chart.

before milli vanilli pulled off one of pop music’s biggest scams in 1990, “nolan thomas” pulled a similar stunt in 1984. elan lanier, a black studio singer recorded vocals for “yo, little brother” but when it came time to release the single, a non-black performer was chosen to appear in the video and be the face of “nolan thomas.” produced by chris barbosa and mark ligget, “yo, little brother” reached #26 on the r&b chart and #57 on the hot 100.

years before cathy dennis made “touch me (all night long)” an international hit, fonda rae’s original version was a club hit in 1984 peaking #5 on the dance chart. it was also featured in the 1985 “a nightmare of elm street” sequel “freddy’s revenge,” – a horror film with the most gayest and homoeroticism subtext of all time.

released in 1985 when nayobe was just 15 years old, “please don’t go” blended pop, dance, electro and latin music sensibilities. the song set the format for the latin-freestyle genre and every song that have since followed.

by the time singer/songwriter joyce sims hit the club scene in 1986, electro began to morph into a more house & latin-freestyle sound. joyce’s debut single, the matronix produced “all & all”, was the perfect blend of the aforementioned sounds. the song would become one of the first freestyle songs to chart inside the top pop 20 in the UK.

the freestyle/house duo hanson & davis consisted of two former studio session singers. their sole hit was the pulsating “hungry for your love.” the song garnered heavy rotation at r&b radio and peaked at #16 on the dance chart in 1986.

“my heart gets all the breaks” is, in my humble opinion, one of the greatest freestyle songs of all time. released in 1987, the song peaked inside the top 20 on the dance chart and #48 on the r&b chart.

by the mid 1980’s, latinx artists like lisa lisa, the cover girls, safire, tka and nayobe had merged the electro sound with latin music sensibilities making way for the latin hip-hop sound that would later be identified as freestyle music. house music and new jack swing replaced the electro sound in black radio by 1988.

today we honor of the electro/breakdance/freestyle music genres and the critical role they played in keeping Black, latinx and queer dance floors packed in the 1980s.