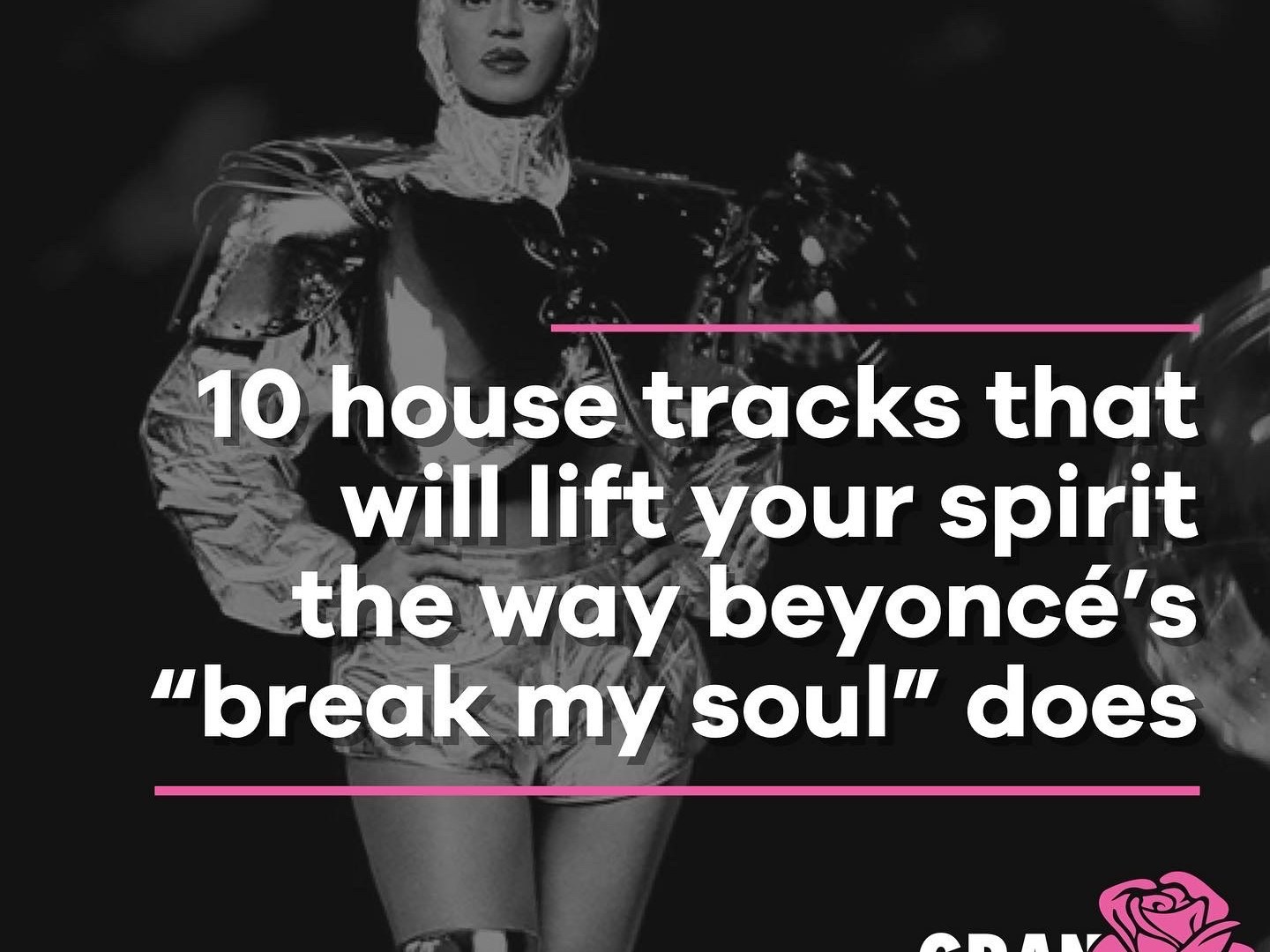 if you are up at this time like i am it is probably because you have been dancing in the privacy of your bedroom to beyoncé’s new track “break my soul.”

released as the lead single from her forthcoming album “renaissance,” scheduled for release on july 29th, “break my soul” is dance floor burner that harkens back to the great house music sounds of the early 1990s. the song brilliantly samples the baseline of robin s’ 1992 pop top dance classic “show me love.” a loving nod to gen xers who danced our asses off at the club to that jam.

produced by the dream, “break my soul” is also a triumphant declaration of the jubilance that comes when a person prioritizes personal freedom and peace. exactly the kind of song we need right here and right now. and with the glorious feature of queer icon and bounce artist big freedia who shouts the lyric “free your trade!” makes “break my soul” the pride anthem we deserve!

in celebration of beyoncé’s return and nod to 90s house music, here are clips of 10 songs from the 90s for pride month (and all year long) that will also lift your spirits the way queen bey has with her new single.

TEN CITY “WHATEVER MAKES YOU HAPPY” 1990

ten city’s “whatever makes you happy” is the ultimate pride song. it sonic manifestation of the celebration of pride and Black joy!

ten city were one of the first chicago-based house groups to gain national attention.  the r&b/dance music trio consisted of singer byron stingily, guitarist herb larson and keyboardist byron burke. by 1990, the group charged several singles across multiple charts including both r&b and dance charts. “whatever makes you happy” served as the groups sophomore album’s lead single.

in 1993, vocalist and music icon martha finally released her self-titled debut album. released on RCA records, the album produced two dance club chart top singles including the stirring gospel-tinged “carry on”. the song was a testimonial of all that she survived both personally and professionally. it also served as a love letter to her lgbtq fans who were building community out of immense loss during the height of the AIDS crisis.

ultra naté is one of house music’s most dynamic and enduring performers. she has been scoring top 5 dance singles since the early 1990’s. while her catalogue is impressive (do yourself a favor and stream her “situation: critical”), she is most remembered for 1997 global hit “free.”

the late great house music vocalist kim english takes us a place where spiritual revivals take place with this inspirational dance-floor anthem “unspeakable joy.” released in 1999, the song topped the billboard dance chart and remains one of the best house songs of the decade.

with this c+c music factory written and produced anthem, the queen of soul aretha franklin proved that she also hold as place in the royal court of dance divas. “(pride) a deeper love” topped the billboard dance chart in early 1994.

one of the most talented house music vocalists to emerge from chicago, the birthplace of house, shawn christopher delivers both a refreshing and uplifting take on the 1986 michael mcdonald hit “sweet freedom.” christopher’s voice holds the power to penetrate the pain and isolation we have all experienced and remind us that we are all on the brink of personal freedom.

New Jersey Patterson’s own adeva was one of the reigning queens of house music when she exploded onto the international scene with her debut album, “adeva!.” while she achieve the crossover success in the US that cece peniston and crystal waters later achieved, advea no doubt helped softened the soil for the roots of house music to take off at radio. adeva’s sophomore effort “love or lust?” hit record stores in 1991 and featured the thumping pop-talk of a jam, “don’t let it show on your face.” produced by the new jersey house music collective, smack, the song reached a peaked of #34 in the UK.

chyle, if you ever need a song to get you and your spirit together, this is it! released in 1996, “don’t stop movin’” by livin’ joy was a worldwide smash reaching top 20 in multiple countries and peaking at #67 on the billboard hot 100.

mass order was a house music duo from baltimore, maryland that emerged in 1992 with their soulful garage house song “lift every voice (take me away).” the track features samples of dance & soul diva loleatta holloway vocals from her 1980 dance classic “love sensation.”

considered one of the greatest vocal house songs of all time, Barbara tucker’s “beautiful people” set queer dance floors on fire when it was released in 1994. co-written by tucker, along with fellow dance diva india, lem springsteen and “little” louie Vega, the vega and kenny “dope” gonzalez, produced the track the first of seven number-one dance singles for barbara. it remains one of the quintessential pride anthems.

and in closing, and as always , here is a playlist and a few lovely reminders.