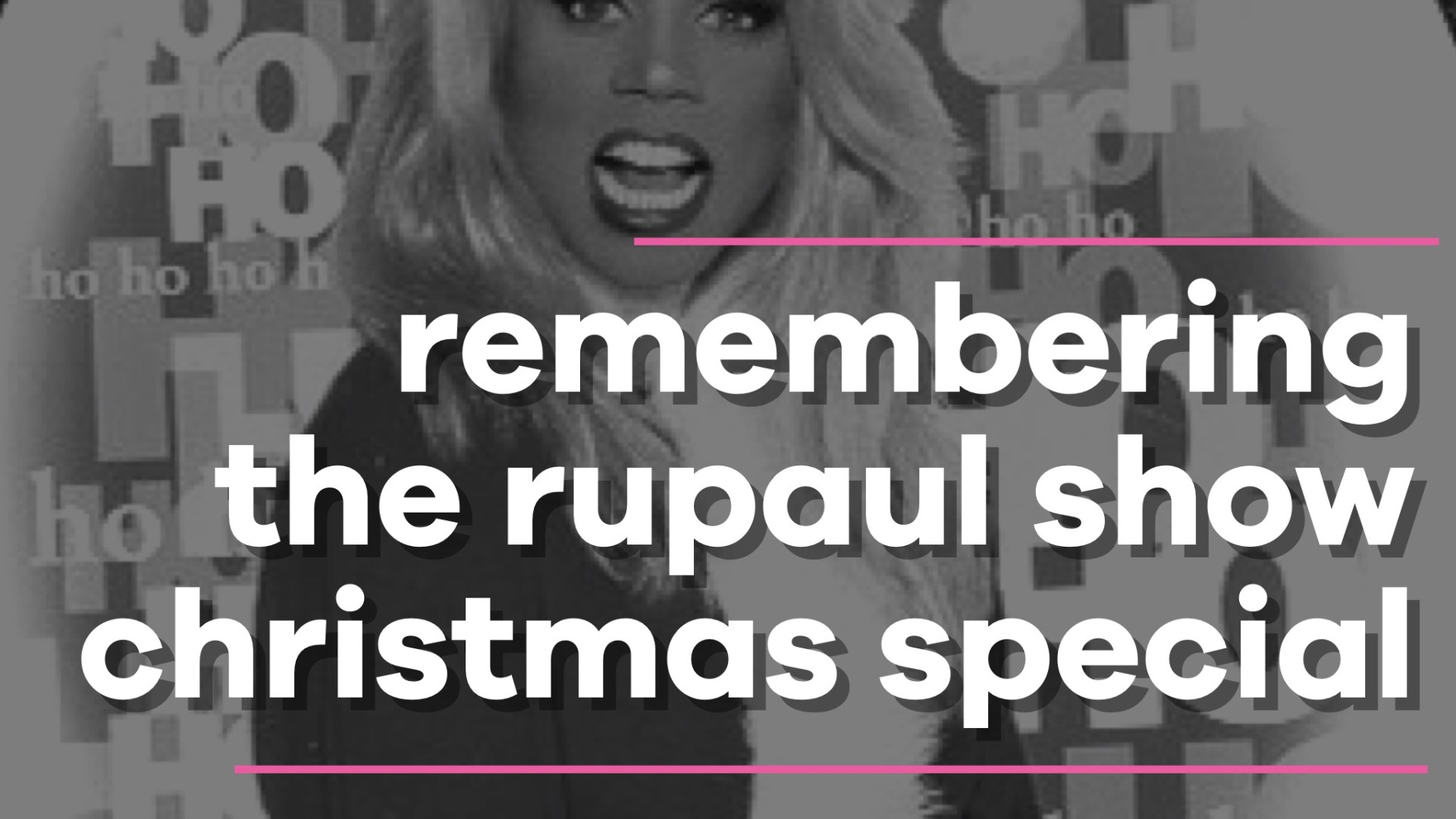 growing up in the 1980s, tv christmas specials were usually over-the-top variety shows that featured musical numbers and sub-par comedic skits by d-list celebrities of yesteryear. and baby, i loved everything about them all! the gowns. the make-up. and celebrities singing “don we now our gay apparel.” it was this blueprint that rupaul followed for his 1997 christmas special.

by the mid-1990s, rupaul had emerged from the new york club scene to the top of billboard’s dance chart with his 1992 anthem “supermodel (you better work).” he also appeared in numerous films including “crooklyn,” “the brady bunch movie” and “to wong foo, thanks for everything! julie newmar,” and was the first drag queen to land a major cosmetic enforcement deal when he became a spokesperson for mac cosmetics. so conquering television was a natural next step.

premiering on vh-1 in october 1996, “the rupaul show” was part talk show and variety show. the show was a mixture of celebrity interviews, musical performances and comedy skits. it was unlike anything on tv – even cable tv and it was absolutely glorious!

one of the highlights was the show’s christmas special, which is saying a lot considering that celebrities who appeared as guests included diana ross, cher, eartha kitt, dionne warwick, the pointer sisters, mary j blige, whoopi goldberg, john waters, cyndi lauper and the late tammy faye and anna nicole smith.

here are my top five favorite moments of this absolutely brilliant special!

the special’s main story arc is of “ebony,” a joan crawford inspired character played by rupaul who is the epitome of diva and the grinch. garbed in classic hollywood attire and the best blonde joan crawford wig, rupaul and co-host michelle visage deliver a hilarious skit featuring new york post gossip queen cindy adams, that is a nod to the 1981 film “mommie dearest,” one of the campiest movies in history.

because rupaul has always been the queen of cross-promotion, the christmas special served as a shameless plug for his “ho, ho, ho” album. released on october 28, 1997, the album features cheeky covers of several holiday standards including “santa baby” and “you’re a mean one, mr. grinch,” which are both featured in the special. but it is rupaul and michelle’s bouncy rendition of the 1984 dolly parton and kenny rogers song “with bells on” that is THEE standout on both the album and tv special.

3. they’re gonna laugh at you!

what makes this special brilliant is that it is self-aware and in on the joke. from skits that feature rupaul dancing at the “north pole strip club” to VH-1 white producers trying to make the show less “gay,” the show’s queer point of view keeps it from coming across as trying too hard to please everyone.

no christmas special is a christmas special without d-list celebrities. and i promise you, i ain’t being shady because in the 80s and 90s, it was often these celebrities that openly supported the lgbtq community. for example, suzanne somers, who in the late 1970s was one of america’s most popular actresses, but garnered a large queer following after her fall from grace in 1981 and her reemergence in the early 90s as the queen of the infomercial as the spokesperson for the thighmaster. others guests included actress debi mazar and comedian sandra bernard who beautifully sings a hanukkah blessing

in 1997, the AIDS crisis was finally beginning to subside long enough for us to catch our breath after the medical breakthrough of HAART. the premiere of rupaul’s unapologetically queer talk show a year earlier no doubt played an integral part in shifting queer narratives on television before ellen degeneres made sitcom history when she and her character came out in april 1997 and the 1998 network television premiere of “will & grace.”

the rupaul christmas special in many ways was ahead of it’s time but it was also not his first forray into christmas entertainment. that would be the “rupaul’s christmas ball” which aired regionally in 1993. that special is legendary in its own right with a line-up that included little richard, latoya jackson, eartha kitt, boy george, nirvana and taylor dayne. but it was the VH-1 special, that helped to cement rupaul as the drag queen of christmas to mainstream audiences.

in the years since, rupaul has continued to demonstrate his love for the holiday season with the release of two more christmas albums, “slay belles” in 2015 and “christmas party” in 2018. both albums were released in conjunction with two drag race christmas specials because why!? ru is the queen is cross-promotion. most recently, rupaul starred in the 2021 VH-1 original movie “the bitch who stole christmas.”

that’s a lot of christmas for one queen but we can’t get enough.