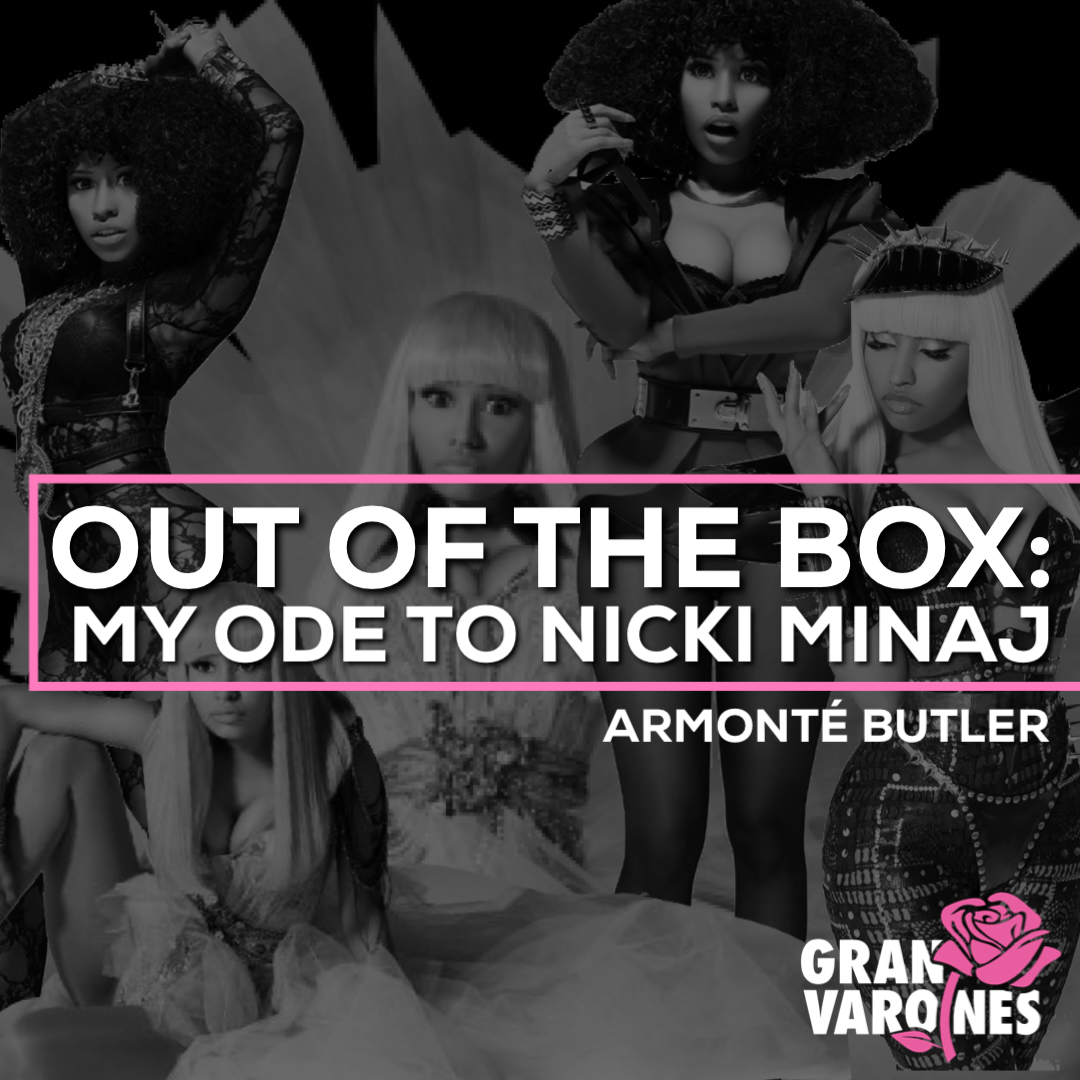 Like most people, I learned about Nicki Minaj and her love of the color pink during my early gay social media days on Myspace and Tumblr. I was in middle school navigating insecurities that come were flamed by a culture of “boy team vs. girl team” gym activities and the suffocating male gender norms of “hard vs. soft.” But it was the very discovery of Nicki Minaj and her “Playtime Is Over” mixtape that I not only became a stan—or a “barb” according to the world fandom, but I found a way to tap into parts of myself I was still trying to figure out.

The mixtape pushed boundaries in Hip-Hop and introduced us to Nicki’s rap style that includes a genius play on words, metaphors, and theatrics. It was all of this as well as the mixtape’s now-legendary artwork that hinted at her Barbie persona that left my 12-year-old self captivated. I began to make connections to what her presence in Hip-Hop was slowly doing to how I was navigating gender and sexuality. I could remix and define it myself. I could think outside of the box of what the world was telling me.

By the time I began the 9th grade, Nicki and Trina were two of my favorite artists.  Nicki Minaj had released her last mixtape “Beam Me Up Scotty.” The artwork depicted her as a superhero that Hip-Hop and Pop music certainly needed. It was clear that she was coming to the rescue.  My high school didn’t allow students to have their phones in the building due to fears that students would cheat on tests. Fortunately, there was always a student that snuck their phone into the school like contraband so that we could blast “I Get Crazy” and “Itty Bitty Piggy” during lunch. Nicki had the students organizing!

In 2010, I was attending a high school that was anything but affirming of LGBTQ students. And it was difficult on just about every level. Friends and I attempted to establish an official GSA (Gay-Straight Alliance/Gender & Sexuality Alliance), or maybe it was an unofficial Barbz Club. We weren’t allowed to as part of the series of unofficial policies. Not only did this remind us that the school was hostile towards LGBTQ students, but there really wasn’t a place for us to connect inside or out of school. Some days at school were so bad that I didn’t want to go back to school, and I loved school!

After numerous high-profile features, Nicki finally released her debut album “Pink Friday,” on November 22, 2010. The unofficial GSA/Barbz Club was supported by a guidance counselor, Ms. Williams, and a science teacher, Ms. Jacobson, who offered us the classroom to convene and of course listen to the album. The album peaked at number 2 on the Billboard 200 and marked the second-highest debut week in the history of female hip-hop recording artists.

“Pink Friday” was just what 10th-grade Armonté needed—an embrace of the different, the fun, the pink. It’s wild to remember how just a few years ago hip hop was still seen as straight and cisgender male-dominated. The genre was especially known for its stigmatizing opinion and lyrics about LGBTQ people. Through Nicki’s genre-bending music and creative style, especially her campy pink wig, she carved out a space in hip hop for “outsiders” to enjoy and relate to.

“Pink Friday” was a cultural moment. Two of the album’s singles “Super Bass,” and “Moment 4 Life,” are not only hip-hop classics but are two of the most influential pop songs of the last 20 years. “Pink Friday” wasn’t just a rap album, but one that equally celebrated pop and R&B. A quick “Nicki Minaj Pop-Rap” Google search will send you down the rabbit hole of critiques and opinions about Nicki’s blend of the multiple genres. Most critiques, current and in the past, are still unable to grasp a Black woman’s ability to exist outside of more than one genre at the same time.

“Pink Friday” made it clear that Nicki Minaj was an out-of-the-box artist that would continue to challenge binary thinking and create a new path. From appearing as a guest judge on American Idol, fashion deals with K-Mart and Fendi, and major collaborations with MAC and OPI, Nicki has shown the heights of where a rapper can go with their career. Not only has Nicki Minaj given fans music and accessories, but also a constant nod that it’s okay to be different through her colorful costumes and wigs. Since its debut, Nicki Minaj has released hundreds of features, three chart-topping albums, and made appearances in movies. Her charisma, endurance, and talent has inspired a generation of fans to be true to themselves and fight double standards.

Today I celebrate the birthday of Nicki Minaj, a global phenomenon that continues to encourage me to think, move, and  be outside the box.