Sometimes we are late to the BBQ right? Well in the case of Ultra Naté (pronounced Na-Tay), I didn’t arrive at the BBQ til 1998. I was 15 years old and my teenage icon Filipinx Freestyle/Dance Diva Jocelyn Enriquez was sprinkled with Disco fairy dust along with dance divas Amber and Ultra Naté under the moniker Stars On 54. They revamped the 1971 folk classic “If You Could Read My Mind” by Gordon Lightfoot into one the most fascinating covers I’ve ever heard (just listen back to back and gag). This collaboration introduced me to Ms. Naté and piqued my curiosity.

Eight years into her career, Ultra Naté had landed five singles into Top 10 on the Billboard Dance Chart by the time I bought the single to her hit single “Free” at Tower Records (I miss you so much). As soon as I heard that guitar riff in the intro followed by those chords and 4/4 I was hooketh. I immediately grabbed a copy of the Situation: Critical album. I stared at the artwork fascinated by its silvery gloss and the acupuncture needles in her face. It was futuristic as fuck! The album’s photography was shot by the legendary Eric Johson who is known for iconic photos of Erykah Badu, Lauryn Hill, Aaliyah, and Biggie. I wasn’t totally sold on the album at first because as a teenager I was infatuated with Freestyle music and this was out of my teenage comfort. However, the album grew on me and eventually I connected to each song on a personal level. At the time I was struggling with my budding sexuality, lack of interest in education, and a toxic-ass family dynamic. This album would eventually become my personal teenage bible. 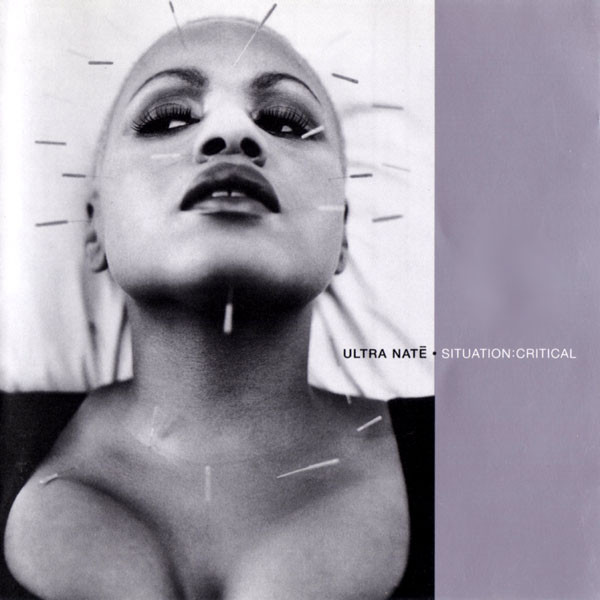 Situation: Critical marked a new era for Ultra Naté herself. After leaving Warner Bros years earlier she was in artistic limbo and thinking about returning to medical school. Instead she moved forward and released an array of singles: “Party Girl” for the soundtrack and film Party Girl, and “10,000 Screaming Faggots” a controversial collaboration with The Moonwalkers. The goal for her new material was to fuse the elements of Rock, House, Soul, and Funk. She was finally taking control of her music career and it paid off in the end. “Free” catapulted Ultra into the stratosphere and the song itself has seen many incarnations since 1997. This album would be the liberation Ultra needed and also for many listeners like myself.

“Somehow things must change, and it’s got to be for the better” the lyrics from the albums intro track “Situation: Critical” pierced my young gay soul. When my being sexually molested was brought to the light my parents were so wounded by life; none of them had the capacity to support me. My father was strung out on drugs, my mother’s mental health was dwindling, and my step mother struggled to keep a roof over our heads. I felt so fucking hurt by their neglect that all I thought of was escaping at 18. My then therapist Judy had a huge black and white picture of New York City and one day I declared “I’m going to live there!” Until then I endlessly played this album on my discman throughout my teens to keep my ass sane.

There was a rage building inside me and “Found A Cure” was that song that embodied what I felt. Lines like “Feels like I’m going crazy, feels like I’m going insane” were my everyday life and I wanted out but I was still underaged. “How many times have you been left alone and you feel confused?” solidified my connection to Ultra. This was the second single from the album which hit #1 on Billboard Club Songs. The music video was directed by Charles Stone III who would years later direct the epic CrazySexyCool: The TLC Story. Larry Flick of Billboard wrote “Naté fearlessly faces the challenge with a jam that smartly doesn’t aim to duplicate the tone of her now-classic hit…The diva is in fine voice here and is matched by a muscular bassline and keyboard/guitar interplay that oozes with funk flavor…Miss Nate proves there’s more than Free in her locker with a pure floorfiller. A Gloria Gaynor for the Millennium.” Mic drop.

“A New Kind of Medicine,” the album’s second track, and third single, lightened the mood after the dark yet realist ‘Situation’. During this era in House music Disco samples were a huge commodity. While this was purely an original song the Disco influence is prevalent. The single had some heavy hitters on the remixes and the first two being producers in Freestyle: Albert Cabrera, David Morales, and Danny Tenaglia. The Morales mix is quite festive especially at the 5:20 mark when you get that tidbit of Inner City’s “Big Fun” followed by a lyric not in the original: “Stop taking me down.”

My favorite track on the album was the last single released from the album, the Al Mack produced “Release The Pressure.” How can you not feel like you’re transpired into a film where the woman is struggling, breaking shit, cursing bitches out, lights a joint, a sip of wine, puts on her favorite 12” and gets her damn life. The production on this track has so many beautiful layers from the piano, to the horns, and guitars. It always felt like time froze whenever this track came on. The song was also featured on the soundtrack The 24 Hour Woman starring Rosie Perez. This is one of my forever tracks because it always remains true to this day: “You get up, It knocks you back down, Release the pressure, Let it out.”

The album itself pays homage to the 70’s and 80’s influence of staples in Disco, Funk and House which are very evident in: “Any Ole Love” (Indeep’s “Last Night A DJ Saved My Life”) and “Love You Can’t Deny” (Royal House “Can You Party”). The mellower affairs “It’s Crying Time” and “Every Now and Then” were so damn pretty that they seduced my young self who was anti anything slow.  The last original track on the album “Divine Love,” produced by the duo Masters At Work, transports you to Sunday mass everytime. That 5 minute mark is pure gospel ear candy with those luscious rhodes and ab libs take you on a journey to the ether. This felt like the sequel to “Rejoicing (I’ll Never Forget)” from her first album Blue Notes In The Basement. At this point in time I was severely struggling with my belief in God however this song just anoints you, especially the 9 minute MAW Version.

This album took me on a musical journey. It became my bible, my salvation, my healing. In the spring of 2001 my life took a huge turn. I had fallen in the love with a man in NYC whom I thought I’d be with forever. After a huge argument with my parents I finally said “fuck this shit I’m out!” Ultra’s lyrics rang in my head “Now I know you’re no good for me, Now I got to find a remedy,” my remedy: move to NYC. After settling into my then boyfriend’s apartment I would blast this album on volume 5000 and the whole damn planet would shake. I didn’t give a fuck about the neighbor downstairs because I was ‘Free’ and living my damn best gay life. I didn’t leave my heart in San Francisco that’s for damn sure!

In 2012, I had a full circle moment when I was hired by Naté’s management, Peace Bisquit. It was completely surreal to be in direct communication with her, and an honor working under the brilliance of Bill Coleman (remember Deee-Lite? “Groove Is In The Heart”? Nuff said.). I was bestowed the task of managing the execution of the Hero Worship album to digital platforms. Miss Naté was the most humble artist I ever worked with. A memory I will always hold dear is a tender moment we shared at  the Paradise Garage Reunion Party in 2014. The DJ began to play “The Whistle Song” in honor of the iconic Frankie Knuckles who had passed just months earlier. As the song played, Ultra began to cry. I put my arm around her and consoled her. The same way her music had done for me in all the years before.

Thank you for never giving up on your music Ultra because this album saved me!

“You might save someone’s life.” – Ultra Naté “Situation: Critical”

If you are experiencing or have experienced sexual abuse please call the National Sexual Assault Telephone Hotline 800.656.HOPE (4673)