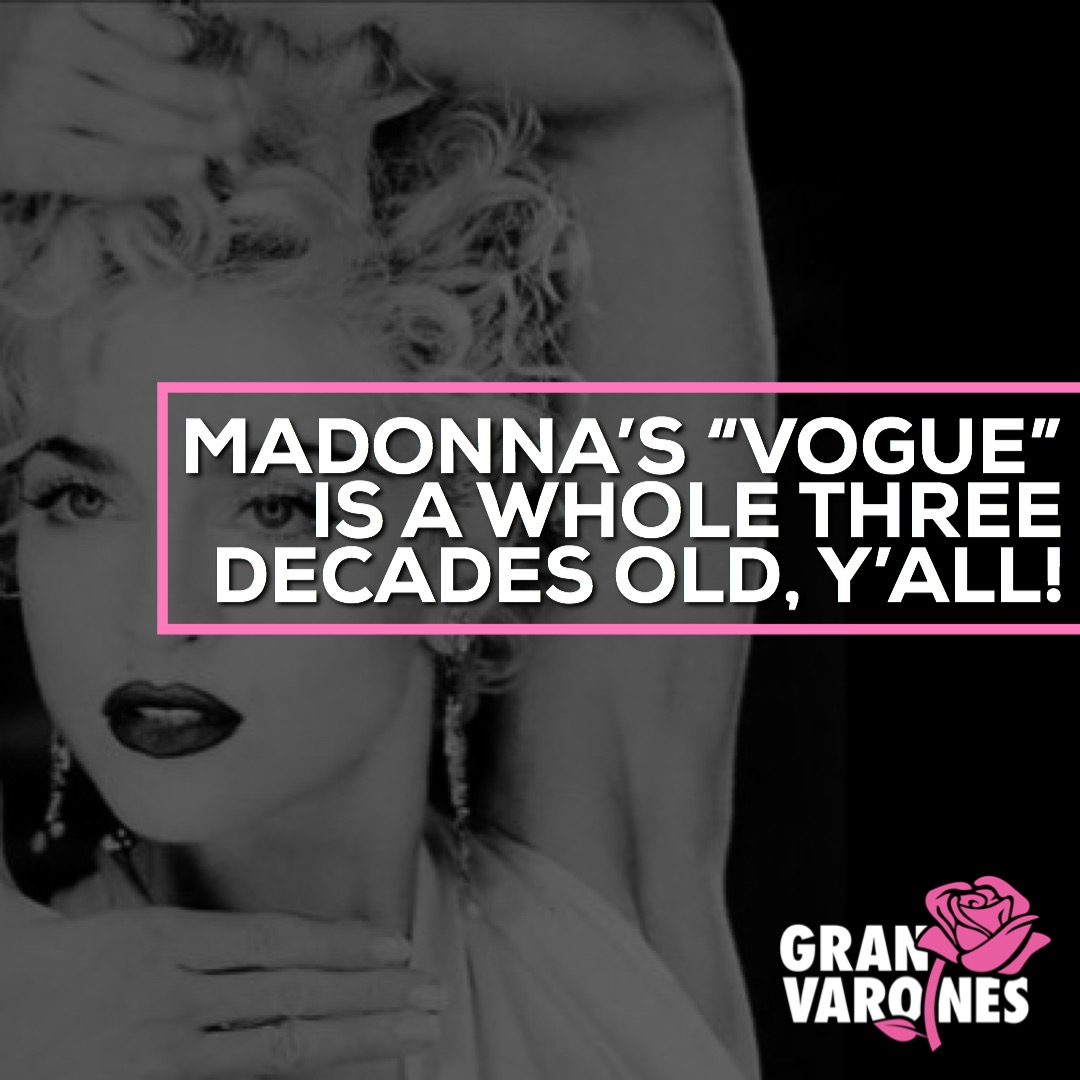 in 1990, madonna was arguably the most popular and consistent pop artist on the planet. at the time, she had already sold millions upon millions of records and amassed an astounding 17 consecutive top 10 singles. sixteen of the singles reached top 5 including 7 number ones on the billboard hot 100. madonna was a decade into her recording career and with the release of a surprise single, she was about to enter another imperial phase of her career.

madonna was still actively promoting her 1989 album “like a prayer” in the spring of 1990. in fact, the album’s fifth and final single, “keep it together” was still in the top 20 of the hot 100 after peaking at #10 in march of 1990. but a chance meeting with luis and jose xtravaganza of the legendary house of xtravaganza would inspire the creation of a song that became one the biggest culture moments of 1990.

released on march 27, 1990, “vogue” quickly became the most successful single of madonna’s career selling 6 million copies worldwide and reaching #1 in over 30 countries,  including topping the US hot 100 in may of 1990. jose and luis not only served as lead choreographers, they were prominently featured in the “vogue” music video. it was through madonna’s and producer shep pettibone’s deep house track that the two xtravaganzas provided a glimpse of black and latinx ballroom culture in the accompanying music video that mainstream america had not yet seen.

since it’s release, the black queer and trans created art form of voguing has re-emerged in the mainstream via shows like “rupaul’s drag race,” the vice docu-series “my house” and most notably, the ever popular and critically acclaimed fx show, “pose.” in fact, the 1990 release and cultural impact of madonna’s “vogue” was a story arc across several episodes of the second season of “pose.”

so here we are 30 years after the release of one of pop music’s most commercially and culturally successful songs by one of pop’s most polarizing figures. i can attest to all of this because i was around to witness most of it. i have a clear memory of watching the teasers for “vogue’s” world premiere on mtv. i remember being in awe by the video’s imagery and wondering to myself, “is that a titty?”. i knew i was watching something so queer at a time when all things gay were associated to deviancy, aids and death. i also remember learning the choreography and showing it off to my aunt who quickly responded, “don’t you think those moves are kinda gay?” i didn’t respond but internally i was like, “bitch, duh!”

so in celebration of the “vogue’s” 30th anniversary, i wanted to ask a few friends around my grown and sexy age what they remember about the song. i asked my good friend, fellow queer historian and longtime madonna fan, juan, peter, who has long history in the philadelphia ballroom including being a member of the house of africa and my former mentor and former father of the house of ferraramo, kwame to share their memories of “vogue.”

louie: do you remember when you first heard “vogue”?

JUAN: i was in 5th or 6th grade when i first heard madonna’s vogue. that song was everywhere but it never really appealed to me.  it didn’t really hit me till i was 14 and went to my first gay club, arena in hollywood, ca. the “older guys” i met through that scene – about 18-20 years old but at the time they seemed very adult – showed my friends and i what vogue was. i never really connected to the song till i saw live vogueing at arena. around that age, i also saw the “blonde ambition” tour broadcast on hbo, that whole thing became my obsession and my entry into queer culture. later in high school, a counselor in my lgbt support group showed us “paris is burning” and everything felt complete. being a madonna fan back then, when aids was still at the forefront of the lgbt community, being a madonna fan was code. now that i think about it, the song became a hit at the time that i came out and went to my first gay club.

KWAME: i think it was the world premiere of the video on mtv.  if i had heard it before it wasn’t as exciting as waiting to see the visual.

louie: what were your initial thoughts about the song? about the video?

PETER: my initial thoughts about “vogue” when i first heard it, i was in delaware. i was hyped! i like “oh look, its gonna be on tv and there’s gonna be a video.” i was hype because voguing was coming out to the mainstream.

JUAN: i didn’t really care for the song. i still don’t. for some reason, i’ve always known all the lyrics so it definitely made an impression.  the video was cool because her dancers were hot, and “fancy,” they were being sexualized in a way that was empowering to their nuanced body language. i would argue that without that specific group of dancers, that era in her career wouldn’t have been as exciting. the mtv awards performance where she lip-synced in marie antoinette drag was way more exciting than the video. when i hear the song, it just doesn’t process or register the way vogue and ball culture does. i was a madonna fanatic for decades, and in some ways still am, but that song isn’t my favorite. it does carry strong memories of coming out to my friends and a type of nostalgic, youthful freedom and for that i appreciate it. i remember when the club kids were on geraldo and they played vogue during an intro and they all gave geraldo shit, like, “we don’t listen to that!” – that’s how i feel about it now.

louie: were you aware of voguing before the song’s release? what was your entry into the world of voguing?

PETER: oh yes, i was well aware of the whole ballroom scene and vogueing long before madonna. and i was already in philadelphia way before that song.

JUAN: my entry to voguing was simultaneous to the first time i went to gay club and i met trans sex workers, and gays in the party scene doing this thing from new york. i remember all the queens talking about new york, looking to new york, walking runways on dancefloors and trying to vogue. the origins of vogue were unknown till a few years later when i was in high school. the song was also powerful in how it gave the working class access to “feel their fantasy.”

KWAME: Yes, but I never walked before the song was released.  I started walking (the category) later that year.

louie: how would you describe the impact of the song in 1990?

PETER: i think the impact was a lot for mainstream. because mainstream got to see what ballroom and voguing was because it had already existed for decades and it was interesting to see mainstream try to do it. really, really interesting.

KWAME: it partnered with the release of “paris is burning” brought visibility to the ballroom scene, and I think it helped create a dialogue that brought ballroom across the US in a big way.  it definitely influenced choreography for a few years.  although other artists (most notably, Jody Watley) had featured vogueing in some visual format before madonna, “vogue” became the anthem that made the dance a staple movement.

louie: how would you describe the song’s impact over the last 30 years?

JUAN: now we have the language to say she culturally appropriated an entire subculture (her career relied on it), we can say she exploited a whole community. that statement would not be wrong; but with vogue, she also highlighted a space and language that was entirely invisible and needed a lift. people were dying of aids, and tons of scared queer kids found joy in this song.  in some ways it was a gift. rupaul’s “supermodel” (1992) could not have existed without “vogue.” deee-lite before that. underground club culture and dance music got a hand from this awkward single.

KWAME: for me, the power of the song waned as the visibility true ball culture rose.  it’s a cute song about a dance, kinda like “the twist”.  but i feel the video is ICONIC, and would even say her 1990 MTV VMA performance of the song are probably still entertaining.  let me see… it’s one of those culture phenom moments, which is to be expected for madonna.  and “vogue” is probably one of her three career defining songs!

PETER: i think after 30 years, madonna’s vogue has a small impact because ballroom has changed in the past 30 years, it has evolved. and it’s gone to different places with different songs from around the world, but it has a small part of the history.

there is no debating that “vogue” was a pop-culture moment in 1990 and like most things that are consumed by the american populous, the moment that madonna’s vogue ushered in didn’t last. however, the art form continued to thrive in the ballroom scene. so as we remember the impact of “vogue”, we must honor and raise up the black and brown queer and trans people from the new york ballroom scene who carried the beautiful art of vogueing before, during and after madonna’s cultural moment in 1990.