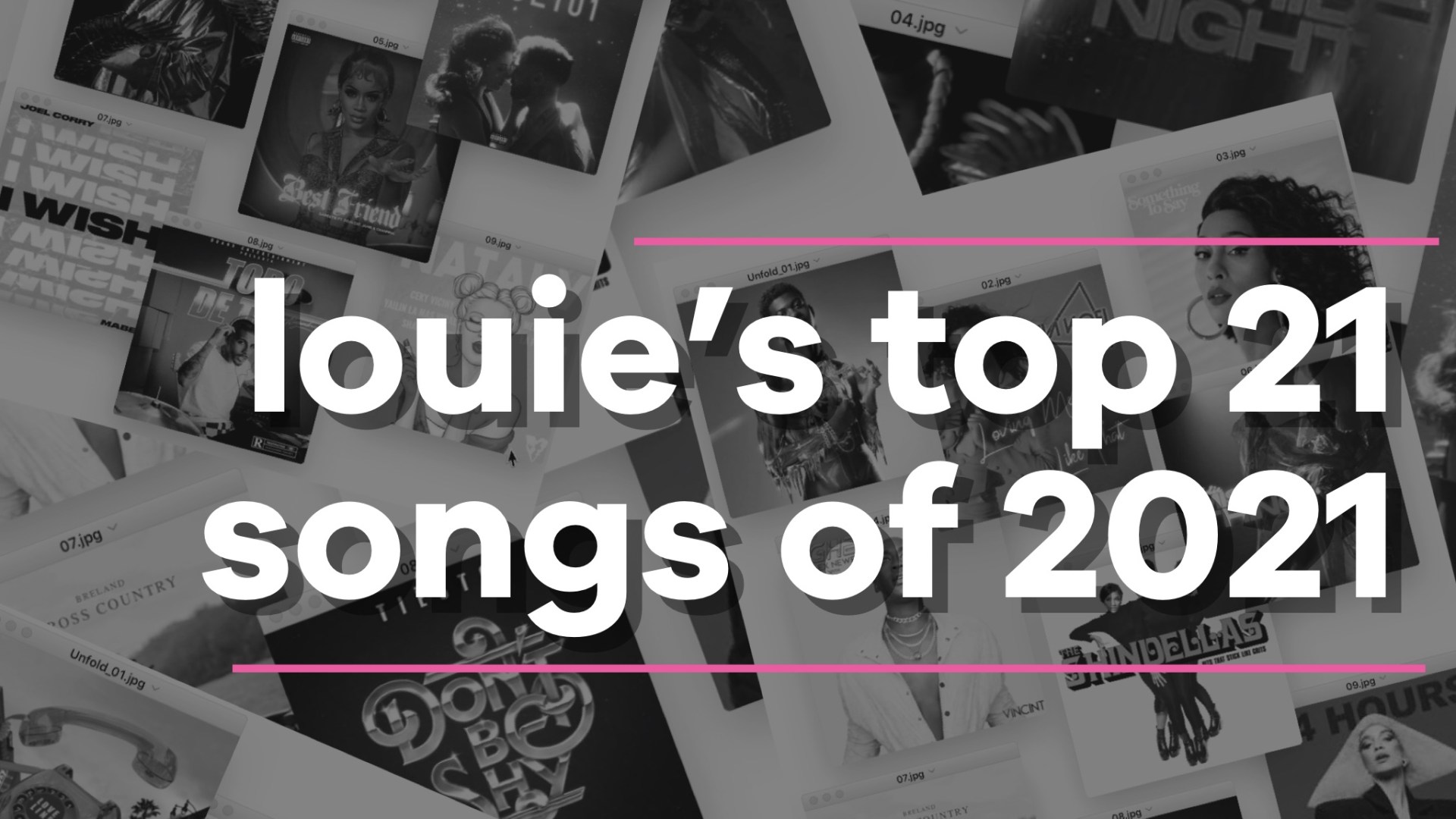 There were no club night outings or huge parties in 2021 but I still found opportunities to dance and sing along to my favorite songs while sipping on some homemade drinks. And this was possible because 2021 was filled great songs from multiple genres that helped lift my spirits when the year proved to be another thing to survive. Here are the 21 songs that kept me smiling, crying and dancing in 2021.

I have been a fan of A’lisa B for years. She has written some of the dopest Latin Freestyle songs of the 1990s including Rochelle’s “Praying For An Angel” and “Holding On To Love.” This past year, she teamed up with Grammy Award-Winning and House Music pioneer Maurice Joshua and gifted the 80s post-disco-inspired “Sunshine.”

New Jersey-born and raised Breland made waves in 2020 when his Hip-Hop/Country song “My Truck” went viral and landed on Billboard’s Hot 100. This year, he released the auto-biographical “Cross Country.” The stripped acoustic guitar-laden track also serves as his mission statement to shake up the Country music genre.

19. MICHAELA JAÉ “SOMETHING TO SAY”

Michaela Jaé aka MJ Rodriguez showed off her vocal chops on the groundbreaking FX show “Pose.” Following the show’s this show’s finale this past June, Michaela released “Something to Say.” Co-written with Earth Wind & Fire’s own Verdine White, the feel-good breezy soulful bop “Something To Say” was accompanied by a beautiful music video that cements Michaela’s promising future as a pop artist.

Tia Kofi gained international recognition after her stint on season two of RuPaul’s Drag Race UK earlier this year. She then released “Part 1: The Damage” EP which included the Bright Light Bright Light written synth-pop gem “Loving Me Like That.”

2021 was the year of Saweetie! In addition to landing her own menu at McDonald’s and arguably making the fast-food restaurant relevant again, she scored two Grammy nominations including Best New Artist and Best Rap Song for the Doja Cat featured “Best Friend.” released in January 2021, “Best Friend” was one the year’s brightest moments and further proved Saweetie’s pop appeal.

When Puerto Rican rapper and singer Rauw Alejandro released “Todo Te Ti” this past May, he scored hit biggest international hit to date. The electro/pop song not only landed him inside the top 40 on Billboard’s Hot 100, but it also peaked at #2 on Spotify’s Global Chart.

Swedish singer Agnes scored an international dance hit in 2009 with “Release Me” but subsequent singles failed to keep the momentum. This past year, she reemerged with the pulsating early 80s Hi-NRG bop “24 Hours.” Accompanied by an absolutely stunning music video, “24 Hours” re-introduced Agnes as an artist to watch.

Originally released in the fall of 2019, “NYC Baby” was given a second wind this year with the release of some dope ass remixes from Initial Talk, Joey LaBeija and Maluca herself. But it is the original version that is a sonic ode to Latin Freestyle Music that shines the brightest.

Whew! “Coldest Fire” is without a doubt one of the year’s most powerful and vulnerable songs. Inspired by the events surrounding George Floyd’s death, AHI (pronounced Eye) bares his soul about the turmoil and difficulty of knowing what to say and how to respond in a world where everything is dissected.

Karol G is best known for her Reggaeton hits but it was this collaboration with Tiësto that had me rushing to the dance-floor (in my living room). “Don’t Be Shy” doesn’t break new ground in the world of dance but its catchy hook made this a stand out of the year.

I love a good 80s electro remix and British singer/songwriter Mahalia delivered with this Jarreau Vandal remix of her single “Whenever You’re Ready.” Co-written with the brilliant MNEK, the song was inspired by a break-up Mahalia was going through.

While not as successful as “Montero (Call Me By Your Name)” and “Industry Baby,” which both topped Billboard’s Hot 100 this year, “That’s What I Want” was a cultural moment in its own right. The guitar-driven synth/pop-rock song and its accompanying BRILLIANT music video captured the queer longing of unconditional love not often heard and seen in contemporary pop music.

If there is one song that soundtracked my friendship with Armonté, it is “Nataly.” In lieu of shaking our asses at the club, we’d play this song whenever we hung out and simply shake our asses. I also have to state how much I freakin’ love this music video.

08. KYLIE MINOGUE WITH YEARS & YEARS “A SECOND TO MIDNIGHT”

While Kylie Minogue is not the first to throw her hat into the Disco resurgence ring, she is definitely the one to do with such ease. And this was more than evident with the release of her 2020 album “Disco,” arguably one of her best albums. In 2021, she released a guest edition of the album that included the thumping “A Second to Midnight” featuring the ever consistent Years & Years.

Puerto Rican Reggaetón artist Jay Wheeler caught the electro-pop bug this year with the release of the “BIOL-101.” While not his usual vibe, the song proves just how dynamic and versatile Jay Wheeler is.

Award-winning DJ/producer Joel Corry teamed up with fellow British pop star Mabel and delivered “I Wish,” one of the year’s euphoric dance tracks.

Zoe Wees is the present and the future! 10 seconds into “Hold Me Like You Used To,” Zoe’s soaring vocals grab you by the heart and don’t let go until you are curled up in a ball and weeping on the floor. If you have not checked out Zoe’s “Golden Wings” EP, then do yourself a favor and do so immediately!

If there is one thing miss Tinashe is going to do is that she is going to serve the gurls a fantastic pop/dance song. And in 2021 she did just that when she teamed up with UK DJ/Producer Shift K3y for the anthemic feel-good 90s inspired House track “Love Line.”

Kylie Minogue is quite possibly the most enduring and consistent pop/dance queen in history. Mama stays in her lane and continuously delivers quality pop songs year after year. Although not released as a single from her “Disco” album, “Miss A Thing” is a standout track that highlights Kylie’s knack for catchy hooks and beautiful melodies.

The Shindellas is one of the most exciting girl groups to emerge in years. Based in Nashville, Tennessee, The Shindellas’ throwback Pop/R&B sound is unlike anything happening and everything we need in contemporary Pop music. It only took a single listen of “Win My Heart” for me to become a die-hard fan. I am praying to every God that this song is given an official single release because it deserves as much exposure as possible.

If there is anyone in your life that still reduces Pop/Dance music to fluff, play them “Higher” by Black queer artists VINCINT, Alex Newell, and Princess Precious. Released in May 2021, “Higher” is more than an anthemic earworm, it is literally a spiritual experience. If there was any justice in this world, Top 40 radio would give this song, or any VINCINT song a chance.