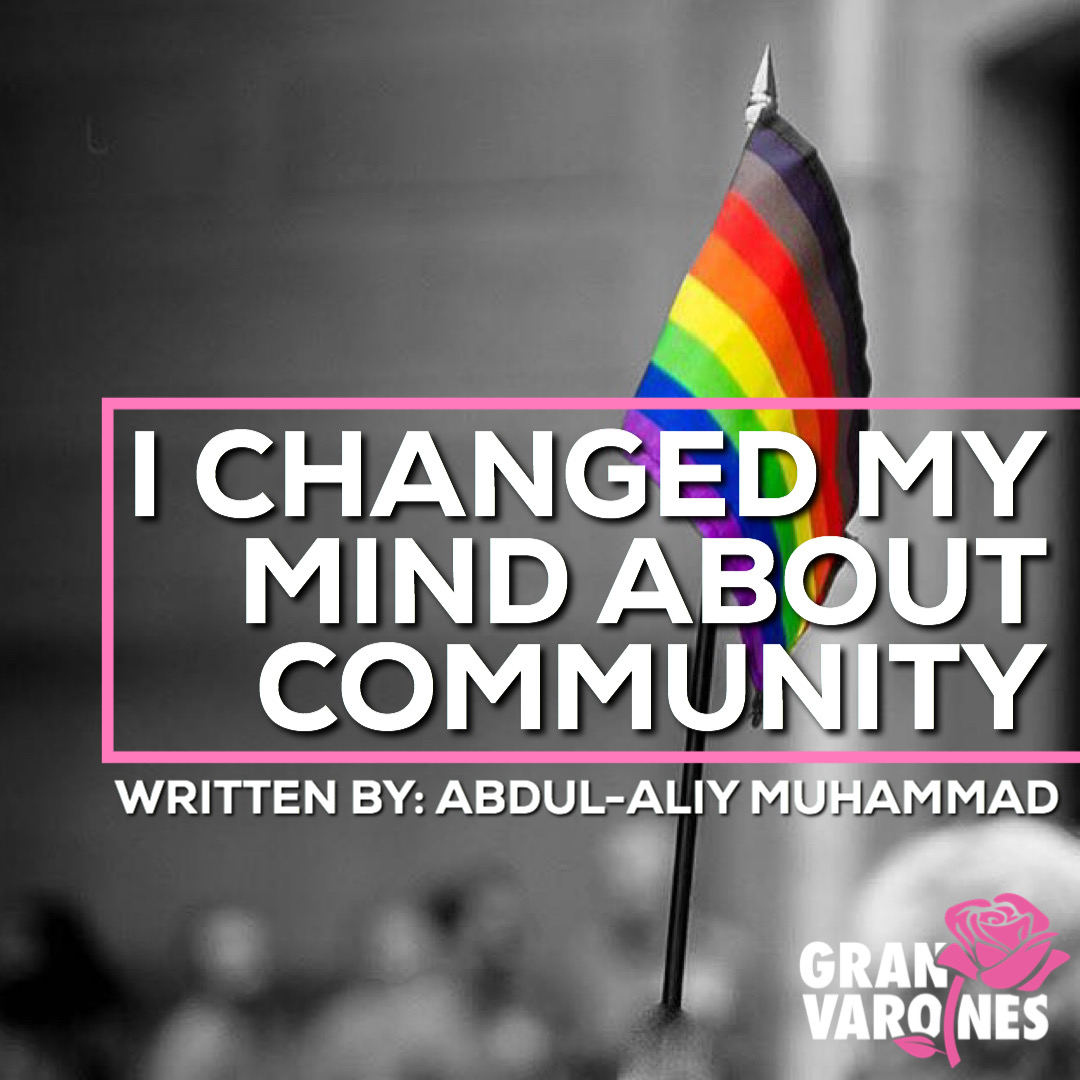 Last year I broke up with the LGBTQ2 community–well the shallow gatekeepers that ravaged our collective understanding of what it means to hold identities at their intersections. Let me explain, I’ve always been queer, I went through so much struggle trying to understand who I am in this binary world. As a young person I’d make muslim prayer and during those moments I’d pray to Allah to undue this burden or exorcize the jinn that made me different. I had this idea of a punitive, unwavering God, who was a patriarch. Ready to condemn me to Jahannam or a hellish afterlife.

In 1999 my mother asked me an odd question, that was the first iteration of the “are you gay” question. I was sixteen at the time and my body was changing rapidly. I would wear tight fitting pants and my body wasn’t a “normal” boy’s body. I had hips that I adored and somewhat of a full chest and she had asked if I wanted to be a girl. It wasn’t in an emphatic hateful way, it was with concern and deep empathy that she asked this question. I didn’t know what to say, I’d never thought about this. I knew that I liked boys.  I said no and this question wouldn’t circle back until the summer of 2001.

I had stumbled upon Philadelphia’s Gayborhood, I was in center city just killing time before going back home. I was seventeen and I saw Black transwomen and gay Black men who were just hanging in droves on 13th and Walnut Street. My eyes were playing tricks, I thought, have I found my people? Yup, sure ‘nough these were my folks. I wandered down to 12th street and walked down to Cheap Art cafe, this was located between Locust and Spruce streets. I went in to order a cheesesteak that cost about three dollars. I was overjoyed. This cafe was filled with all my people. I met someone who I’ll just use an initial for. G. was a tall statuesque young man, my age, who had a beautifully sculpted face, high cheekbones and beautiful smile. I immediately loved him and we instantly clicked. In walks Michael, who remains my dear friend to this day. Michael eyeing G. came over and sat down. We laughed, got to know each other, exchanged phone numbers and planned to see a movie soon.

Months later my mother confronted me again with a new iteration of the are you different question. I was feeling myself, as the youngin’s say now. I was working at TGIF’s and had a cell phone, I’ll never forget it, it was a startech flip phone LOL. I had stayed with G. at his boyfriend’s house for the weekend and had ignored my mother’s calls. When I got home she wanted to know where I was. She then asked if I was gay and I told her that I didn’t know, maybe I’m bisexual, I said. She had a fearful response, had someone coerced me to be gay. My mom prodded more, has someone touched you as a child? Are you being influenced by people. At that very moment Michael called my phone, which she had in her possession. Answering the phone, she interrogated Michael and told him not to call again. I was placed on punishment, meaning I couldn’t leave the house. Years later, before she passed away, we talked about that night and she explained that she always knew I was gay, but that she was afraid of what the world would do to me and she was also afraid of me succumbing to HIV, because so many she loved had died.

I fully emerged as a gay Black man after this, sharing my fully realized new identity will all who wanted to know. I went to Woody’s for underage night, which was Wednesday back then. I noticed the racial divide, blacks on one side of the dancefloor and whites on the other. When I became able to drink, I noticed how the bartenders would wait on us last, my friends and I would talk about this endlessly. At the end of 2008, I tested HIV positive and felt defeated. I went to Mazzoni Center for care and volunteered there before working at the organization. I got to see up close the pockets of privileged white LGBTQ2 people talk about how we were all in this together. That HIV and homophobia and transphobia made us all equal in struggle. That never sat well with me, but I trudged along because my newfound mission was to end an epidemic.

Later I would organize against racist gay bar owners and during this time I was labeled divisive, because I was calling out racialized oppression in the Gayborhood. I was dividing a community, with others, but the likes of Darryl DePiano had enacted ad hoc dress code policies at the now shuddered ICandy and had called a worker and patrons the n-word repeatedly on video. They were truly divisive. This escalated, a hearing on racism in LGBTQ communities took place, then the ousting of then Director of LGBT Affairs Nellie “Helen” Fitzpatrick. Nonprofits like Mazzoni had a reckoning, leading to resignations and the unionization of frontline staff.

After all of this dust began to settle, so to speak, there I was a campaign manager for Sherrie Cohen’s third bid for a City Council At-Large seat. I had conflict with  a prominent transgender activist and this all became news when I stated she was white at a flagraising event. I was not only ostracised, called transphobic and a birther by many white people in the community. I had been made to feel wrong for speaking about something largely known in Black and brown community pockets.

Depressed, I thought about the tension of what is community, here I was being berated again by people who claim we stand together, the people who called us the n-word, the people who pathologize Black transgender women for surviving by doing sex work. The same people who were part of a power structure that kept working black and brown LGBTQ2 people in lackey and tokenized positions. It’s when I realized that I am not part of the LGBTQ2 community. I figured out that community is deeper than a label, it encompasses shared culture, language and often racial politics that hold us in community. Community extends to how we touch and embrace each other, and our lives.  It’s in our shared vision of liberation.

So, during Pride in covidian times I proclaim that my community are Black transgender women who I take guidance from, Black non-binary and gender variant folx inspire me.  I look to elders for their perspectives and Black & brown poz (HIV positive) and disabled people have my heart. These are my safe(r) spaces, as my friend Louie would say, in them I find home.

Abdul-Aliy A. Muhammad (They/Them) is a Black queer HIV positive organizer and writer from Philadelphia.