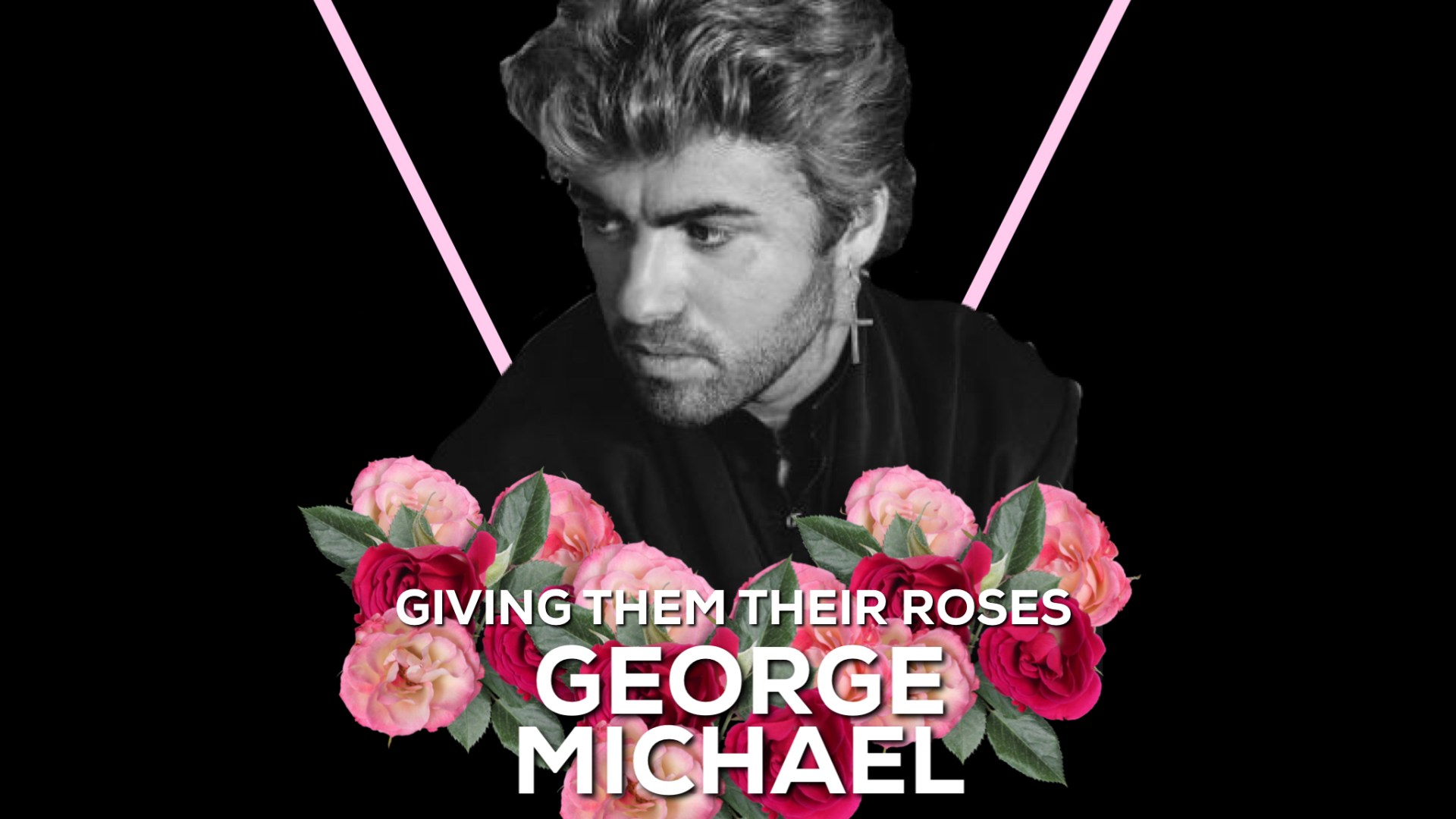 to be a global pop star who was gay but not out during the height of the AIDS epidemic meant living in closets that were never to be vacated. It meant contending with being loved and adored by a world that was simultaneously waiting with baited breath to stigmatize you if the rumors of you’re being gay were true. It meant never forgetting that the suspicion gayness was both an enormous threat to your career and to your worth as a human being. this was the cultural backdrop during the rise and imperial peak of george michael.

george michael was one the first and most successful artists of the MTV era. as one half of the monstrously successful early 80’s bubblegum-pop duo wham!, george captivated the world with his voice and soft-feminine esthetic. when he transitioned into his solo career in 1987 and released his debut album “faith,” one of the most successful albums of all time, george reached iconic status that rivaled madonna and prince as an international pop star and sex symbol.

at the turn of the 1990’s, george shifted his focus from pop dominance that he would later state was driven by his ego, to a produce music that was more spiritually fulfilling. while he never matched the staggering success of “faith,” he cemented himself as one music’s most respected beloved vocalists.

throughout his entire career, george had to contend with speculations about his sexual orientation and then about his HIV status years later. he would experience immense lost and ridicule from media but he refused to allow those challenge to harden his tender and generous spirit. george’s private philanthropy for children’s causes and HIV was extensive.

in 2004, george released “patience,” his final studio album before his death on december 25, 2016 at age 53. the collection revealed a proud gay man who was closer to peace and healing. while he never reached that destination, he left a catalogue that not only helped shape pop music but soundtracked the AIDS epidemic.

george once said that music was the greatest gift. and we are so grateful for the gifts he left us. here are 9 of those songs.

wham! had the #1 song in the US with “wake me up before you go-go” the week “last christmas” was released. hitting UK record stores on December 3, 1984, “last christmas,” possibly the gayest sad-boy Christmas song ever, went relatively noticed in America at the time. it has since become a timeless classic that dominates radio and streaming charts every holiday season.

billed as wham! featuring george michael, “careless whisper” topped the US chart in february 1985 just as the AIDS hysteria was tightening its grip on the world. the moody ballad about immense guilt that renders one unable to dance after cheating on a “friend,” cemented George as an international heterosexually assumed heartthrob. as george’s star rose, so did the public speculation about his sexual orientation.

in 1987, george officially launched his solo career with the controversial single, “i want your sex.” released as the number of AIDS diagnoses was reaching 50,000 in the US alone. the song’s hypersexual lyrics and imagery resulted in it being regulated to late-night radio and video rotation. “i want your sex” still managed to peak at #2 on the hot 100. the song helped to launch his debut album “faith” which went on to sell an astonishing 25 copies worldwide.

exhausted from the dizzying heights of global celebrity and the pressures of having to print as heterosexual, George opted to not appear on the artwork and music videos for his 1990 album “listen without prejudice: volume one.” the lead single “praying for time” examined the world’s apathy to just about every social issue of the time except the raging AIDS epidemic. still, the somber ballad captured the anger and frustrations felt by those directly impacted by the epidemic.

“too funky” was originally slated to appear on the second volume of “listen without prejudice” but when george shelved the album, he donated the song, along with two other compositions the “red, hot + dance” compilation to help raise funds and AIDS awareness.

AIDS had begun to inch its way closer to george’s world by late 1991. on november 24, 1991, friend and lead singer of queen, freddy mercury died at age 45 due too AIDS complications. it was during this time that george’s partner, anselmo feleppa, tested HIV positive. when george performed queen’s “somebody to love” at the freddy mercury tribute concert to raise AIDS awareness in april 1992, he later said the performance was in honor of freddy and prayer for anselmo.

in 1993, anselmo fellepa, the love of george’s life, died at age 33 due to AIDS complications. george spent the following three years mourning before he returned to music in january 1996 with the release of “jesus to a child.” the Brazilian bossa nova influenced and mournful ballad was george’s painful tribute to anselmo the man he so loved.

1998 was a pivotal year for george. in april of that year, he arrested by an undercover cop for cruising in a public bathroom in beverly hills. the incident promoted george to “come out.” he then became the fodder for tabloids and media outlets with many declaring his career over. George proved them wrong with the release of his jubilant disco-tinged single “outside.” accompanied by a music video that featured George dressed as a cop in a bathroom that. turned into a disco dance part. “outside” reached #2 in the UK and landed in the 10 in multiple countries.

“please send me someone” was featured on george’s fifth and final studio album “patience.” another tribute to his late love anselmo, the song is a plea to find another love and a declaration that no one could replace anselmo.

“just search the clouds until..until
but darlin’, darlin’ though I can’t replace you,
there’s a space in my heart
a space that you left in my heart
just give me something that will
pull me back from the blue“