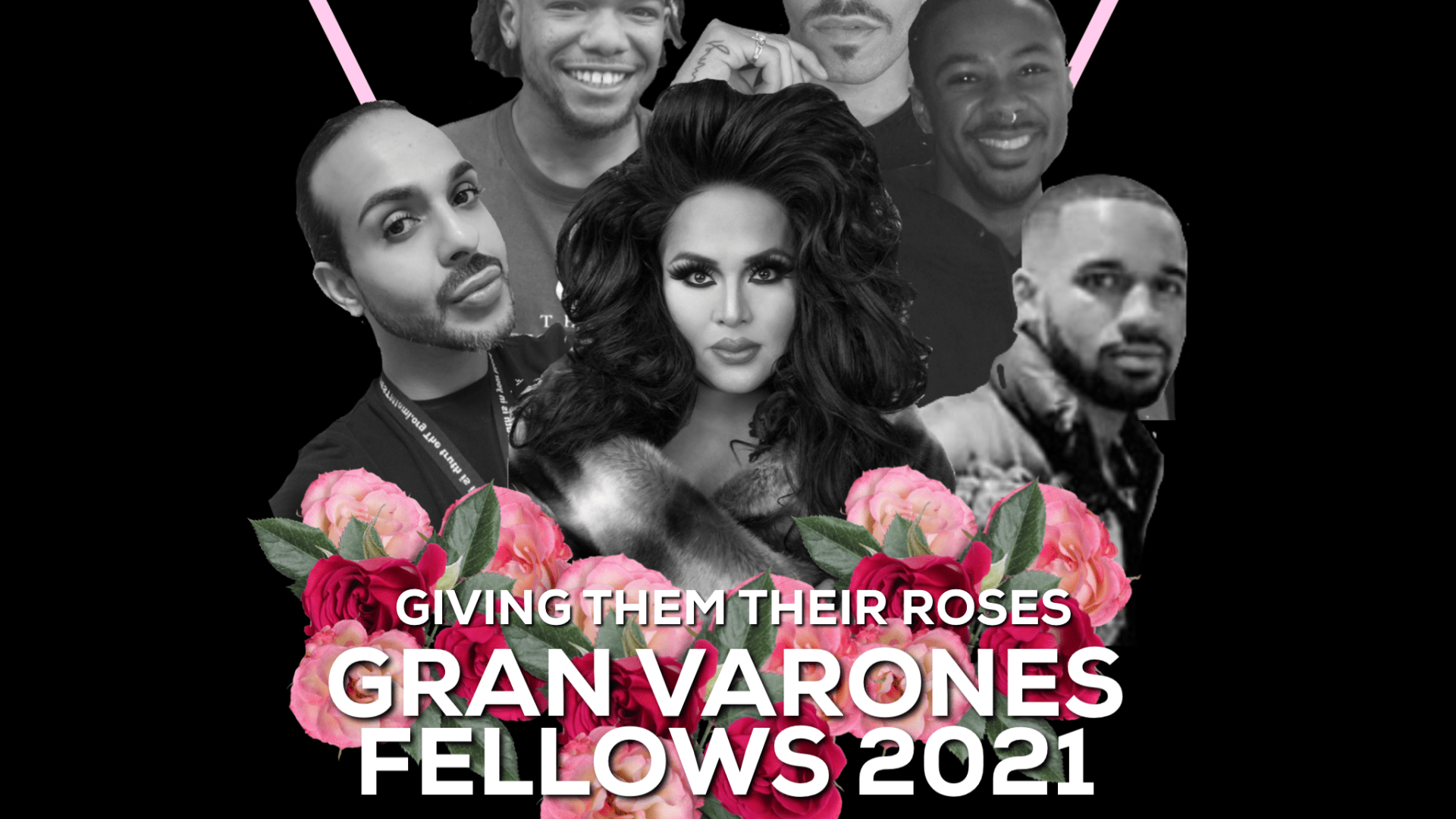 For the past seven years, Gran Varones has grown from a local initiative in Philadelphia to a national and award-winning digital project amplifying queer history, culture, and community storytelling through a Black-Latinx Queer lens. In 2018, we successfully launched the inaugural Positive Digital Arts Fellowship working with gay, queer, bisexual and trans men creatives and storytellers living with HIV across the country. And we are excited to announce the cohort of our 2021 fellows!

This year’s fellows will be supported with resources and coaching from three mentors to combat HIV stigma, build community, and promote family acceptance in our communities through digital storytelling, community building, and cultural organizing.

Milani, a Latinx, GNC, drag queen performer, and activist is currently an HIV Tester & Counselor at CALOR, an affiliation of the AIDS Healthcare Foundation. She has been working in HIV prevention since 2008. She previously worked for VIDA/SIDA at The Puerto Rican Cultural Center as a Program Coordinator for the Mpowerment Program and later as the Manager of Community Education & Outreach. Milani is also part of the ballroom scene, where she served as the Mother of “The Iconic House of Ninja” from 2010-2020. She has been on boards with other ballroom members for research studies focused on people of color in the ballroom community. She is also part of The TransLatina Coalition-Chicago Chapter where the focus is to advocate for transgender immigrants. Her work includes biomedical HIV prevention and presented at the U.S. Conference on AIDS on how to disseminate information on PrEP, PEP, HIV vaccines, and rectal microbicides in the Latinx community. As a former Miss Latina Continental Plus, Milani has been able to use beauty pageants as a platform to expand her work in HIV prevention. She has won many pageants, trophies at balls, and received many awards from community leaders and organizations, but her biggest reward is being able to continue to do the work for her community.

David Sell, aka Davey, has been working as a sexual health educator for the last six years; through their work in the non-profit scene, start-up agencies, and independently, they always found the need to make HIV prevention not only easily accessible and culturally relevant, but visually appealing for black+brown bodies. From managing the social media accounts of various organizations that they worked for (i.e. Leaving Our Legacy, The MOCHA Center, The SHADE Project, and Davey Daddy), they made sure to make safer sex messages reflective to the population they served and dismantle the hold that whiteness held on this sector. Currently, Davey uses digital media and fashion to continue to serve and to educate the masses on safer sex strategies and HIV prevention, in order to help combat HIV-related stigma and other social determinates of health that prevent one from accessing health care. This is being done through their Instagram account and through their start-up initiative Condom Plug.

Let’s start with Gay Cuban American HIV+ Man from Miami Florida with a flare of femininity. Proud of everything I’ve accomplished since being diagnosed in August of 2015. I’ve been part of the Miami Dade Ryan White program serving 489 positive client’s and helping navigate the emotional roller coaster HIV Stigma has caused my client’s. Since then I’ve switched over to the county as an advocate for Mental health and Substance use minorities at risk of contracting HIV. I’ve tested client’s, risk reduction therapy, newly diagnosed therapy, and a shoulder for client’s and community to lean on. I am proud of who I am and will continue to have my voice heard. As long as I have life left in me I will continue to fight for those who can’t and help end the stigma of being HIV+ and a minority.

Repping that southside of Houston from Hirame Clarke <3 I’ve always had big queer energy and being from the hood I’m from just made me want to be more of myself out loud. Many Black and Latinx folks where I am from that do their best to live in their truth of being trans, non-binary or queer don’t get the same opportunity of being automatically accepted and safe, Sometimes they don’t make it out alive. I am here for them. I am the voice for all my people that are not here today that didn’t have the chance to share their voice. I am here to change that narrative. It’s a promise to myself and those no longer here that I am going to change that narrative as much as I can. Self-love is and fighting for equality, reducing stigma is my “why.” Not only for those living with HIV but for those that are impacted by it.  I just want to tell stories, beautiful stories. Creating safe spaces for difficult conversations and stigma-related topics associated with those living with HIV is my mission. You might catch me saying a lot of times ” I am here to do the work”. Making meaningful connections with those in my community and healing is what fuels my fire. I am Queer and HERE!!!

My name is Stephen Acosta; I was born and raised in the Lawncrest and Somerton neighborhoods of Philadelphia, PA. The son of a Dominican father and Puerto Rican mother, my parents taught me from an early age to recognize and be proud of my Latino heritage in a country where downplaying one’s cultural roots is almost expected. Across my life, music has remained a constant. I started singing in church at 3 years old and continue to do so both in and outside of church. I went on to earn my Bachelor of Arts in Music Performance from Temple University—albeit by the skin of my teeth. Post-graduation, I worked as a case manager for a regionally recognized non-profit organization assisting underserved Philly youth. Currently, I work in a charter school as a teacher and substitute teacher for grades kindergarten through eighth, but primarily the second through fifth grades. I also serve as Minister of Music at a church in Philadelphia’s Frankford neighborhood, as well as musician and associate choir member in several historically Black churches in South and West Philly. A lot of people in my life probably don’t know that I’m HIV-positive especially in my professional spheres, but I’ve never felt like it was something to hide. I see myself increasing visibility and fact-based education surrounding HIV, especially as it pertains to Black and Latino populations. I’d also love to travel the world someday, become fluent in more than four languages, and learn how to make my own clothes.

Hi my name is Deandre I’m a 29 year old gay male who loves to show off his passion for cooking by providing meals to LGBTQ community. I also am HIV positive and believe that knowing your status and taking care of yourself is important.

Abdul-Aliy A. Muhammad is an HIV+ writer and organizer. In their work, they often problematize medical surveillance, discuss the importance of bodily autonomy, and center Blackness. They identify as queer and nonbinary and grew up in West Philadelphia.

Armonte Butler is the LGBTQ Health & Rights Program Manager at Advocates for Youth. He supports LGBTQ youth of color and youth living with HIV become activists and leaders in their communities, on their campuses and at the state and federal levels in support of LGBTQ youth health and rights.

Louie A. Ortiz-Fonseca is the Director of LGBTQ Health & Rights at Advocates for Youth, where he works in partnership with young people living with HIV to combat stigma, and hosts a YouTube series for LGBTQ youth, Kikis with Louie. Outside of the organization, Louie is the creator of Gran Varones, a digital storytelling project that amplifies queer history, and is a Ford Public Voices Fellow.